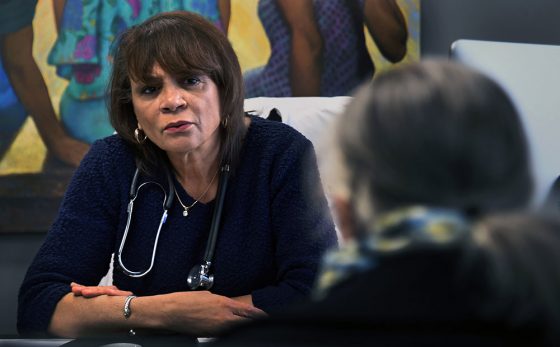 Gene Ransom’s day was ruined within minutes of Attorney General Jeff Sessions’ announcement that he was giving federal prosecutors more freedom to go after marijuana transactions in states that have legalized medical cannabis.

“Our phones just blew up,” said Ransom, the head the Maryland State Medical Society. “We must have had 400 physicians calling to ask us what this was going to mean.”

Sessions’ Jan. 4 bombshell came just a month after Maryland launched its own medical marijuana program, further roiling a health care community struggling with how – or even whether – to bring pot into mainstream practice.

Already nervous, some doctors who had signed up promptly backed out when Sessions reversed the hands-off policy of the Obama era.

“I know of two who had already registered who decided not to take the risk after all,” Ransom said. “One of them had already written recommendations for several patients.”

The problem isn’t limited to Maryland, one of 28 states that has legalized medical cannabis. The reluctance of doctors, particularly on the East Coast, to embrace medical marijuana has become the final and highest hurdle in the push to normalize the drug, advocates say.

New Jersey and Pennsylvania have both reported physician resistance. In New York, only 1,200 of the state’s 97,000 licensed doctors have registered to offer cannabis, according to state officials. In Massachusetts, just 218 doctors have registered three years into the program, limiting the number of patients able to gain access to state-certified dispensaries.

“I think it has been a huge impediment,” said Nichole Snow, president of the Massachusetts Patients Advocacy Alliance.

In Maryland, the top federal prosecutor, acting U.S. Attorney Steve Schenning, told a legal publication last week that he had no plans to go after growers, dispensaries and physicians in the state-sanctioned system. But the uncertainty remains, chilling an already reluctant community of doctors.

Almost 20,000 patients have registered with the state’s Medical Cannabis Commission, the first step in gaining access to legal marijuana. Next they must find a registered doctor to recommend it, and then go to an approved dispensary – there are now 22 open statewide – to buy it. But with 200 to 400 new patient online applications arriving a day, the number of doctors signing up has “flatlined” at just under 700, according to a commission official, leading some to fear that finding a doctor is going to be hard for some patients.

The Sessions scare isn’t the only reason some docs are hesitant. Many already stay away on principle, seeing no reason to reassess marijuana’s street-drug rep. Others work for corporate practices or hospitals that aren’t ready to touch the stuff.

But physicians willing to make the jump are confronted by the purple haze of uncertainty that surrounds a medicine that wasn’t taught in med school.

“It’s a product that most doctors don’t know anything about,” said Ehsan Abdeshahian, a Waldorf-based pain specialist appointed to the cannabis commission in July by Gov. Larry Hogan (R). “The priority now is to educate the providers.”

Abdeshahian is leading the commission’s plan for an online program to answer as many questions as they can for eligible providers, which includes physicians, nurse practitioners, midwives, podiatrists and dentists. A bill currently before the legislature would add physician assistants to the list.

Unlike most pharmaceuticals, cannabis didn’t arrive with an FDA pedigree of clinic trials, dosage guidelines and a list of specific uses. That work is beginning to be done, advocates say, but as the patient rolls swell, many providers are stymied by some basic questions: Is it really safe? Is it actually effective? Is it truly legal?

“I don’t think we’re ready for it,” said Gary Pushkin, an orthopedic surgeon in Baltimore for the last 34 years. He’s waiting for science to back up claims by advocates – and a growing number of patients – that cannabis can help with seizures, nausea, wasting, anxiety, cancer and host of other ills. It’s all anecdotal until the data is in, he said.

Puskin serves as the president of the Maryland State Medical Society, the state’s largest doctors association. He opposed medical marijuana during the long debate before the state legislature, but the group itself stayed neutral.

“Our members are just like the public, they are split on the issue,” said Ransom.

But now that Maryland’s program has launched – more than four years after being signed into law – the group is working to make it as orderly as possible for the doctors who want to participate. And one the of biggest quandaries for providers who may get a third or more of their income from Medicare or other federal sources: Sussing out the legal risk of prescribing a drug still outlawed by the federal government.

Mathew Mintz, a longtime internist at George Washington University Medical School who recently set up his own practice in Bethesda, Maryland, said liability fears are a big reason most of his peers are still wary of the cannabis program. But he decided it was worth the risk and has written about a dozen recommendations for patients in the last month.

“I’ve really been impressed with how medical marijuana has changed the lives of people with chronic conditions,” Mintz said, citing cases of anxiety and insomnia he has witnessed.

Mintz is eager for researchers to backfill some of the healing claims made about cannabis, but he’s confident that the drug is safe enough for many patients to at least try.

Still, the process is far less precise than scribbling in Latin on a prescription pad, knowing the pharmacist will fill the order down to the milligram and type exact directions on the label.

Like many participating doctors, Mintz consults with his patients, decides if they might benefit and then largely leaves it up to the dispensary to come up with a dose and type of cannabis to try. They are the experts in this still fledgling field of cannabinoids, tinctures, flower strains, vaping and edibles.

“I tell my patients to talk to the dispensary,” Mintz says. “I just recommend that they don’t smoke anything.”

That puts him at odds with some in the dispensary field, who want the doctors to be as specific as possible about the what the patient needs.

“The doctors are looking to us to provide the patient with specifics on the different strains,” said William Askinazi, co-owner of Potomac Holistics in Rockville, Maryland. “We can do that, but we don’t venture into the more traditional medical areas of the underlying illnesses.”

Some doctors are far more comfortable making specific recommendations, but even they have to navigate a system can feel more ancient apothecary than modern pharmaceutical.

Patricia Frye’s clinic in Takoma Park, Maryland is geared specifically to elderly patients who are eager to try cannabis but aren’t looking to get high. On a January morning, an elderly couple and their adult daughter face Frye across her desk.

The mother, 79, sits, sometimes squirming in discomfort, as her family describes her case: Years of abdominal pain, anxiety, lethargy, poor sleeping, low appetite, hallucinations. She has been hospitalized multiple times, and Frye takes notes on the range of medications she’s on.

“We’ve tried everything,” said her the daughter, who asked not to be named to protect her mother’s privacy. She had a friend who said she was helped dramatically by cannabis so the woman registered her mother and persuaded her reluctant parents to give it a try.

After giving them a quick primer on marijuana as medicine, Frye writes a recommendation for the woman: 10 mg of CBD, the non-psychoactive cannabinoid and, at bedtime, 2.5 mg of THC, the one that makes you sleepy (and buzzed). She’d like her to have both in tincture form, placed under the tongue. But she can’t be sure what the dispensary has available. Gauging the amounts present in various strains is far from exact.

“Have them call me,” she tells them. “I will talk it through with them.”

The family leaves, still having to register with the state as caregivers so they will be allowed to buy cannabis for the mother. Up next is negotiating the shifting inventories of buds and oils and edibles.

Their session with Frye cost $250, which is not covered by most insurance. The daughter was pleased.

“There are so many complexities,” she said. “It’s good to feel like we have a doctor who is our advocate.”