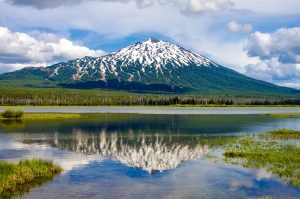 Wholesale prices for outdoor-grown marijuana have dropped as low as $50 a pound, and the situation isn’t likely to improve any time soon.

With hundreds of producer and retail licenses pending approval from the Oregon Liquor Control Commission, which regulates the state’s cannabis industry, the supply glut is expected to only increase, depressing prices further.

As of Jan. 26, there were 520 retailers in the state, with 141 licenses pending approval, according to the agency’s website.

Compare that to the 906 licensed producers, with 858 pending approval.

Retailers apparently are joining growers in a race to the bottom in cannabis pricing.

At $49 an ounce, Oregon’s retail prices are nearing the low mark of $40 experienced by neighboring Washington state.

To ride out even more contraction in the market, businesses – either nascent or long-standing – should be well-capitalized, industry insiders say.

“People would stop trying to get in the industry if they actually knew what was going on here,” said Aviv Hadar, co-owner of Oregrown, a vertically integrated cannabis company in Bend.

“If you think there’s money in growing cannabis, put on a seatbelt and sit back for a 5-10-year ride, because it is not easy.”

Cultivators selling outdoor-grown cannabis to processors are getting as little as $50 a pound, according to Hadar.

“(The market) is just decimated. Decimated,” he said. “There’s so much oversupply.”

“I believe it,” said William Simpson, founder and president of Chalice Farms, a vertically integrated marijuana company in Portland.

He said he’s seen wholesale marijuana selling for as low as $100 a pound, but $50 a pound is “absolutely” possible.

Donald Morse, executive director of the Oregon Cannabis Business Council, said he’s heard of some people paying only $50 a pound for outdoor-grown cannabis trim, but it’s more common to see $100-$150 a pound.

“Prices have come down dramatically,” he noted.

Pete Gendron, president of the Oregon Sungrown Growers Guild, said characterizing the situation as dire for growers “is not an overstatement.”

In the past two years, prices have undergone about a 50% annualized drop, according to Gendron, and he expects prices to drop even more next year as the market continues to contract.

Hadar thinks the industry will look a lot different in a couple of years.

“Half of these people are going to be out of business,” he said.

Most of Oregon’s outdoor growers are selling their product to be made into cannabis oil, often contracting out their harvest to manufacturers for two to three years, according to Hadar.

Contracting with a processor ensures a return on their crop and eliminates the risk of shopping it around.

But, he added, there is a use for outdoor-grown cannabis in the form of vape cartridges, which are driving the Oregon market.

The cannabis oil in vape cartridges also is used for other infused products, including edibles and tinctures. Hadar argues that consumers favor discrete consumption methods.

For consumers who aren’t concerned with discretion, the flower that sits in jars on retail shelves is from indoor grows, and the best of that indoor-grown flower commands a premium.

Oregon is seeing more boutique cannabis farms that don’t harvest a lot of product. These operations are slowly expanding as they pump out high-quality cannabis.

“Quality control really is the name of the game right now,” Gendron said.

“If you still have top-shelf flower, you’re still getting paid a pretty decent price for it.”

The only way for growers to make it in the current Oregon market is to be vertically integrated, Simpson said.

“There’s so much competition,” he added.

Without a retail license, he said, a grower is competing with all other producers and often getting the lowest price.

“They have to be vertically integrated,” he added.

According to Hadar, retail stores are a necessity in your operation if you want to be successful.

While a customer can buy an ounce of flower for as low as $49 at some retail shops, a similar amount sells for a high of $560 in Hadar’s store. It costs him about $50 to grow a pound.

“That business model works,” he said. “Unless you own your own stores, good luck to you.”

Gendron doesn’t necessarily agree that growers must be vertically integrated to survive.

For example, he said, retail chains are developing in Oregon, and a business with 10 stores is going to need a diversified product pipeline to maintain its supply.

He added that businesses that are better capitalized will weather the fluctuation.

Gendron, who also does some consulting, said he recently was approached by someone with a business plan that allotted $500,000-$1 million to get in the game.

If you’re running an efficient business, Gendron said, that’s enough to get started.

“If you have a business plan that’s designed around lower margins or if you’re internally capitalized, you’re probably going to do fine,” he added.

Morse attributes Oregon’s oversupply to a black market that’s more active than ever.

That’s because growers who can’t find a buyer in the legal sector end up selling to the black market, contributing to the supply being produced by illicit growers.

“They’re undercutting the prices in a dispensary,” he said. “We lose a lot of our domestic market share to black-market activity.”

The Oregon Liquor Control Commission could intervene if it deemed such action were necessary.

According to Morse, the agency has the right to evaluate the harvest, compare it to demand, then limit or expand canopy sizes for all grows.

But that’s not the most attractive solution.

“I’m not one for market protection,” Morse added. “I believe in free enterprise.”

Simpson expects the industry to overcome this oversupply situation and get to the other side.

“We will gain more of an equilibrium as an industry and become more of a mature market,” he said.

“It will level out to a market that will sustain.”