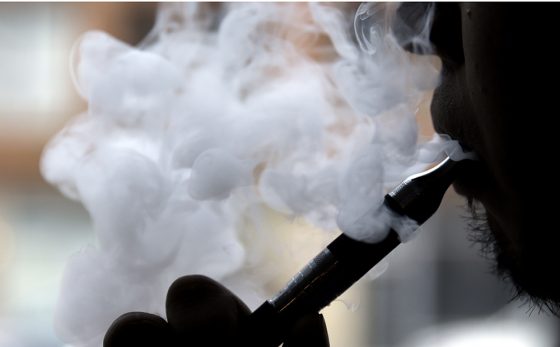 That could include asking Northfield and Winnetka police to issue students non-criminal village tickets if students are found with so-called e-cigs on campus, just as students now get tickets for being found with marijuana or other THC-containing materials, said Tim Hayes, assistant superintendent for student services.

Hayes said administrators may also install vapor detectors in washrooms, to deter students from “vaping” e-cigarettes in those spaces.

Hayes and curriculum assistant superintendent Peter Tragos said, equally important, is educating students about the dangers of a practice some teens think is less dangerous than smoking. The district could also add vaping education into the schedule of detentions, he said.

Hayes said information students gave the district two years ago, through the Youth Risk Behavior Survey put out every two years by the Centers for Disease Control and Prevention, showed that 19 percent of students reported using an e-cigarette at least once in the previous 30 days. The district has given the survey to students since 2002, he said.That’s below the national average, but reported increases in use still concerns administrators, he said.

Hayes said the district works to teach parents and staff how to identify e-cigarette paraphernalia, and teaches students through kinetic wellness classes, as well as through an Under Your Own Influence campaign aimed at telling students that non-using students make up the majority of New Trier’s population, he said.

Discipline for being caught with or using e-cigarettes and tobacco products includes Saturday and all-day detentions, along with referral to New Trier’s student assistance program, Hayes said.

Being caught with e-cigarettes that have THC, the active ingredient in marijuana, or being caught using the cigarettes to consume THC, results in multiple Saturday or all-day detentions, a referral to the assistance program, and village citations for possession, Hayes said.

In the past, school suspensions could be issued for such infractions, but state law now limits suspensions, he said.

School board president Greg Robitaille said that while the district needs to continue to educate students, disciplinary strategies are also important.

According to Hayes’ report, the district will give the latest risk behavoir test to students this month. Once results are compiled, an administrative committee will meet this summer to prepare an analysis, then consider if the district needs to pilot additional interventions, the report stated.