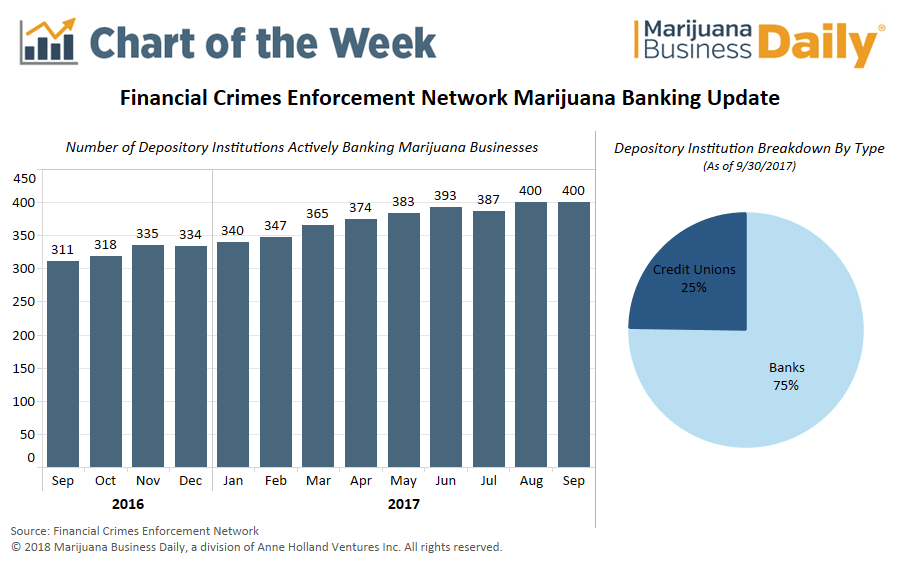 The number of banks and credit unions actively serving the marijuana industry has jumped nearly 30% from a year ago.

According to the latest report issued by the Financial Crimes Enforcement Network (FinCEN), 400 depository institutions are providing services to marijuana businesses, up from just 51 in March 2014.

Joint memos issued by the U.S. Justice Department and Treasury Department in February 2014 spurred the increased access to banking services, as they provided banks with a much-needed framework for how to work with clients in the marijuana industry.

Generally speaking, the memos require financial institutions to verify that marijuana companies are properly licensed by the state and to monitor any financial wrongdoing and report suspicious activity to regulators.

However, many banks and credit unions are wary of working with cannabis businesses.

Marijuana remains illegal under federal law and the risk – no matter how small – of losing a federal license or incurring some other punishment has proved too much for most financial service providers to stomach.

Although banks and credit unions serving clients in the marijuana industry are not directly affected by the scrapping of the Cole Memo – they operate on completely separate guidance from the Justice and Treasury departments – the decision has further muddied the waters in a situation that was unclear to begin with.