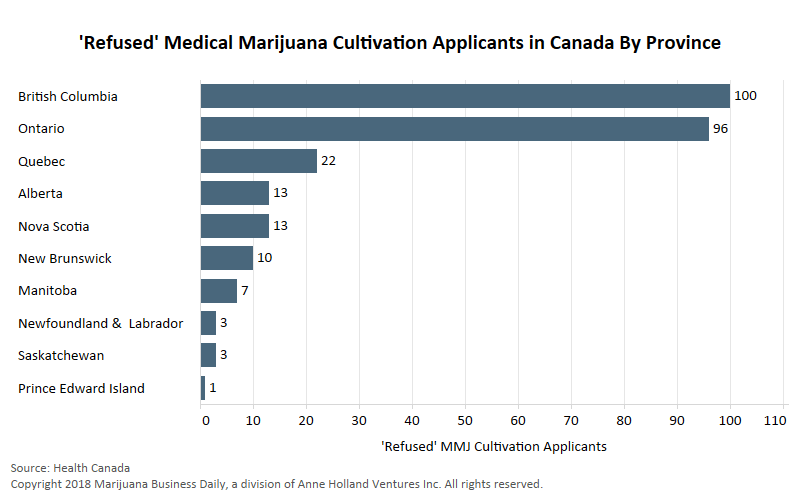 More businesses have been denied medical cannabis cultivation licenses in British Columbia than in any other province in Canada, according to new data provided to Marijuana Business Daily by Health Canada.

British Columbia accounted for 100 of the 268 applicants that have been turned down across the country.

Ontario, which has the most producers and applicants overall, has seen 96 rejected applications.

“A lot of the rejections (in B.C.) were coming from gray-market operators who figured they could just transition over,” said Ian Dawkins, principal consultant of Althing Consulting.

“The physical security plan is what trips most people up,” he said.

“The second one is not having your standard operating procedures nailed down.

“The ‘how to’ of every job in your business needs to be written down, because it has an impact on the security and quality assurance.”

According to Deepak Anand, vice president of government relations for the consultancy Cannabis Compliance, topics covered include:

After an applicant has been notified of the intent to refuse a security clearance, the applicant can appeal in writing within the allotted time frame, which is usually about 30 days.

Another recourse is to get a second set of eyes on the application.

“You can reapply as many times as you want, but I advise people not to go back to square one,” Dawkins said.

He added that “the time is still right. There will be a desperate crying need for your product.”

“They don’t want to reject applications,” he said.

Hyde has worked with 260 applicants.

“Since the ACMPR came in in 2015,” he said, “I have not seen one unreasonable rejection of a license application, and I have seen many rejections.”