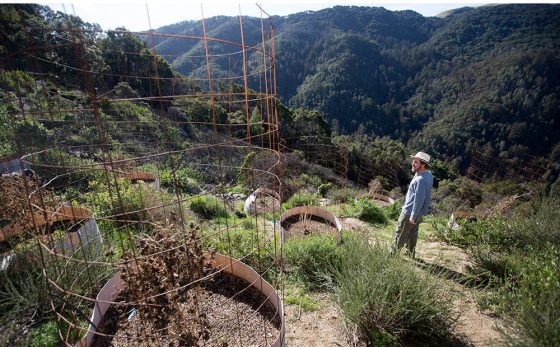 BIG SUR — For decades, hidden in creases of the wild and rugged Santa Lucia Mountains, farmers have eked out a living growing some of the nation’s most esteemed cannabis, hanging onto the hope that someday they wouldn’t fear arrest.

Marijuana in California is now legal. Yet the fate of farmers in Big Sur — the birthplace of legendary “Big Sur Holy Weed” in the Golden State’s storied cannabis culture — remains more precarious than ever.

As springtime approaches, county officials are issuing licenses to high-tech greenhouse growers, mostly owned by well-funded outsiders, on the edge of urban Salinas — but are rebuffing small traditional farmers on parcels in the more remote reaches of Monterey County such as Big Sur.

It’s a pattern seen throughout the 13 counties that make up the state’s prime cannabis real estate, according to the California Growers Association.

“It’s heartbreaking,” said association director Hezekiah Allen, who warns that the trend could confound efforts to bring once-outlawed businesses into compliance with state law following the November 2016 passage of Proposition 64.

“The state passed legalization,” Allen said. “But most small and mid-sized growers are still living in the shadow of prohibition.”

Regulators say monitoring far-flung fields is just too hard. Of the 55 permits issued in Monterey County, all have gone to greenhouse growers. Sonoma County has banned all commercial cultivation at rural residences, a move that outlaws about 3,500 small growers. Calaveras County initially allowed outdoor growers, but just reversed course.

“They promised us Proposition 64 could rejuvenate the farming industry and upgrade agriculture and bring this great thing,” said Big Sur grower Oliver Bates, who’s seeking approval for 50 plants at his mountain home, six miles up a road almost as treacherous as the frigid sea.

“We feel shut out, betrayed. They are only listening to the interests of commercial agriculture,” said Bates, president of the newly formed Big Sur Farmers Association. “Meanwhile, the sheriff’s department is dying to get in here. It’s not better. It is worse.”

Until now, they could grow cannabis under the “collective” model of medical marijuana, on parcels that are zoned for farming, said Big Sur attorney Michael Linder. But the county’s new marijuana ordinance doesn’t allow rural cannabis growing. So the farmers have suddenly lost their livelihoods.

It’s difficult to pinpoint the moment of conception for “Big Sur Holy Weed,” but local lore credits a reclusive monk named Perry, who in 1965 planted some seeds from a rare Mexican strain. In the early 1970s, on isolated tracts of land with no electricity, plumbing or roads, growers perfected a new horticultural technique that produced seedless marijuana, called sinsemilla.

Resinous and sticky, the region’s cannabis gained a reputation as powerful as its potency. Old-timers recall raucous “harvest parties” on bluffs overlooking the Pacific, hosted by the outlaw grower and artist Patrick Cassidy. The largest plant was sacrificed — thrown into a bonfire — in a bacchanalia that didn’t end until daybreak.

“Holy Weed was a magical strain, brought here to the coast and it thrived beautifully in the mountains,” said Chris Buonocore, who frequented the parties. “It was healing for the body and soul.”

Cannabis wasn’t worth much in those days, but it helped sustain a region that had yet to become a pricey global tourism destination, he said.

The war on drugs brought fear to Big Sur, but also higher prices. “It was crazy,” said one 76-year-old grower, whose home was the site of a raid. “They came with helicopters and nets. You’d hear them coming — the chop chop chop, chop. Then they’d land with chainsaws.”

Passage of Proposition 64 had promised legal and economic relief after so many woes.

The growers live a world apart far from the elegant $1,700 rooms at the Post Ranch Inn, the spa at Ventana and the grilled scallops of Nepenthe. They cultivate a land of rattlesnakes and mountain lions, on private parcels scattered among the fir, redwoods and chaparral of the Santa Lucia Range. Some are multi-generation growers; others are members of the local Fire Brigade.

But such small distant fields pose big challenges for regulators, said Simón Salinas, a Monterey County supervisor and former state assemblyman. They’re on land that is inappropriate for commercial agriculture — steep and forested with poor access and little infrastructure. In the towns of Lockwood and Jolon, neighbors complained.

“How do you monitor it — to make sure we can provide the services that are needed?” Salinas said. “We need the personnel. We don’t have enough sheriff’s department or code enforcement teams to get people up there.”

It will take time to see how the current license approvals shake out, but the restrictive ordinance probably will be revisited in the future, said Supervisor Mary Adams, who represents Big Sur.

So far, permits are only being issued to the “ganja-preneurs” in Salinas, where an acre that sold for $55,000 to $60,000 in 2014 is now fetching between $200,000 and $300,000. Once the heart of the nation’s flower-growing business, collapsing greenhouses are being replaced by tall and gleaming high-tech European structures guarded by gates, barbed wire and cameras.

“We will become one of the most sophisticated greenhouse operations anywhere in California, harvesting every week, like an assembly line,” vowed Oakland-based Steve DeAngelo, CEO of Harborside Farms.

Unlike Monterey County, Humboldt County has created a “Retirement, Remediation, and Relocation” program, which encourages those growing on land not zoned for cultivation to move their operations elsewhere. Mendocino County has gone still further, choosing to support the small, organic grows that are the backbone of its cannabis culture.

“We know it’s not your typical farming,” said Ondine Gorton, 44, of the Big Sur Farmers Association. “It’s goat country. But with time, all of these properties will be very accessible. We have things to work on. We know there are challenges. But the county has to meet us halfway.”

Meanwhile, new state regulations have spurred fears of a corporate takeover of the market by large growers. The reason is that the rules don’t limit the total acreage of a cannabis farm, so a well-funded grower can obtain many cultivation licenses, giving them a competitive advantage. Last month, the Growers Association filed suit against the state.

The rural Monterey County growers say the Salinas Valley is a poor place for top-shelf cannabis.

“It’s the ‘salad bowl’ and grows amazing produce. But it’s a cool and humid climate, with coastal fog” and a history of pesticide and herbicide use, said one Carmel Valley grower. In the Santa Lucia Mountains, “you’re closer to the sun.”

Rural growers say they’re losing a livelihood in a place with few other options, on land too steep to support greenhouses. They say they’re proud they contribute to the local economy.

But they face a stark choice: Move, or stay in the illicit market.

The small growers are proposing a “pilot project,” working with local regulators, to allow fields of only 25 or 50 plants, along with food crops. The combined yield of every grower in the Big Sur Farming Association would fit in a single one-acre Salinas greenhouse, they say.

As the days lengthen and the soil warms, farmers’ frustrations grow. In a few weeks, the season will start.

They wonder: Should they plant, or not? Stay in Big Sur, or leave to find work in a distant greenhouse?

“All we have ever been told by the county is: ‘We’ll get to you,’ Bates said. “But they never get to us. We’re in limbo.

“We’re just asking to preserve what we have.”

This story originally appeared at MercuryNews.com