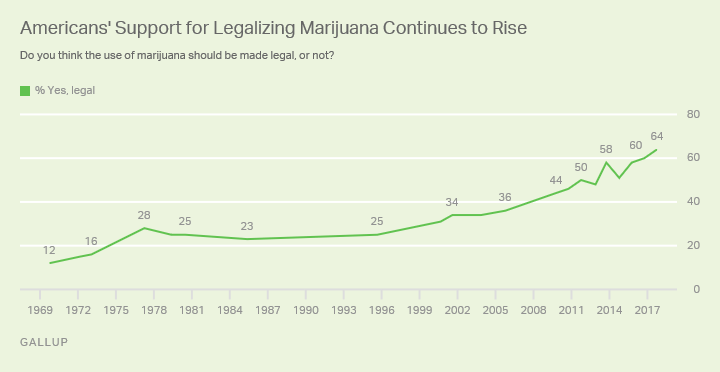 A record percentage of American voters support reforming the nation’s marijuana laws, including majorities of Democrats, Independents, and for the first time ever, Republicans, according to polling data released by Gallup.

Sixty-four percent of voters believe that “the use of marijuana should be made legal in the United States” — the highest percentage ever reported by Gallup since they began asking adults their views on legalization in 1969, which began at 12%. 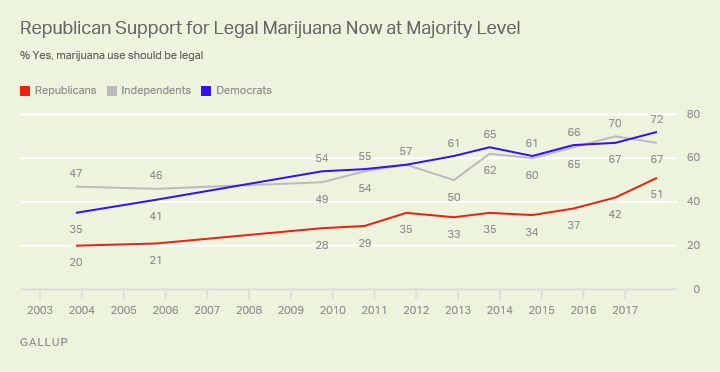 “At a time when the majority of states now in regulating marijuana use in some form, and nearly two-thirds of voters endorse legalizing the plant’s use by adults, it makes no sense from a political, fiscal, or moral perspective to maintain the federal prohibition of marijuana,” said NORML Political Director Justin Strekal. “It is high time that members of Congress take action to comport federal law with majority public opinion and end the needless criminalization of marijuana which leads to encroachments upon civil liberties, engenders disrespect for the law, and disproportionately impacts communities of color.”

There are multiple pieces of legislation now pending that would deschedule marijuana from the Controlled Substances Act and allow states to regulate marijuana for responsible adult use in a manner similar to alcohol.

You can click here to contact your member of Congress to support HR 1227, The Ending Federal Marijuana Prohibition Act.