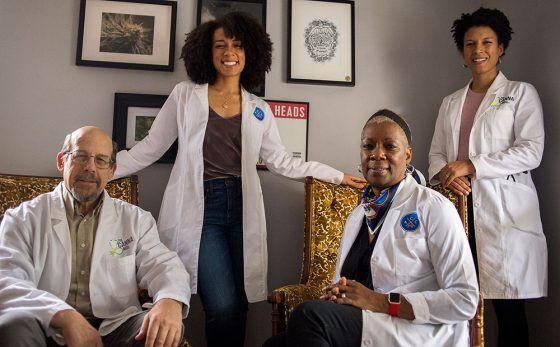 The Knoxes are a clan of four doctors living in Oregon and California who specialize in medical marijuana. They seem to be doing quite well selling something that’s illegal in many states, working with those they know best.

“We’re all fighting the same fight,” said Janice Knox, the founding doctor behind American Cannabinoid Clinics in Portland, Oregon – and the mother of two fellow physicians and the wife of the other. “I think when they do see us they’re surprised at who we are,” she said of her patients. The family aims for something not always associated with medical marijuana: professionalism.

Knox led the family’s move into medical marijuana in 2012, when she retired from a decades-long career in anesthesiology. One of 15 children, she grew up in the San Francisco Bay area and went north for medical school in the 1970s.

“There were not very many black women or men, at least not at the University of Washington,” she said. “It felt like a cultural shock when I went there.”

Knox stuck it out, choosing a career as an anesthesiologist because she thought — wrongly — it would give her more time to raise children. (A lot more on them in a minute.) After 35 years, however, she got tired of working up to seven days a week. And she got tired of being mistaken for a nurse.

After she stepped away from the job, she got a call from a “card mill” – a practice known more for writing prescriptions for medical marijuana quickly than for close attention to patients’ needs. One of the doctors couldn’t be found. Could she fill in?

Knox wasn’t sure. One of her colleagues, a marijuana enthusiast, had been sent to rehab. And despite going to college at the University of California at Berkeley, she was a square – had never seen or smelled marijuana “at a time when drugs were everywhere,” she said.

But she had always been interested in natural treatments, and she agreed to fill in – and was pleasantly surprised to see the patients weren’t a bunch of a reprobates.

“I was shocked to see the people that came into card mill,” she said. “Grandmothers, grandfathers, people with Seeing Eye dogs. They weren’t at all who I expected. . . . These were people who conventional medicine had failed.”

Nor was Knox content to sign prescriptions and send patients on their way. Some had questions, as anyone would when told to take any drug. What strain was best? What about dosage? And was smoking pot better than a cannabis edible or a cannabis oil or a cannabis hand cream?

“I was embarrassed because they expected me, a physician, to tell them how to use this medicine,” she said. “I couldn’t answer them. I did not know anything about cannabis.”

Undaunted, she delved into research of what’s called the “endocannabinoid system” – a network of receptors in the body and brain that respond to cannabis and regulate, among other things, immune response, liver function and the production of insulin.

This is not just something discussed in parking lots at Phish shows.

Volkow pointed out that understanding of the endocannabinoid system suffers from what she called a “circular problem.” Even though more states are moving to legalize medical marijuana, there is insufficient evidence about how it works partly because the drug, a federally controlled schedule 1 substance purportedly of no medical use, is restricted and not easy to study.

The American Medical Association considers cannabis “a dangerous drug and, as such, a serious public health concern,” according to a policy statement. And while it thinks the drug should not be legalized for recreational use, a policy updated last year urged further study, saying the drug’s schedule 1 status should be reviewed “to facilitate grant applications and the conduct of well-designed clinical research involving cannabis and its potential medical utility.”

Knox has read all the studies she could, attended conferences and been certified as a cannabis specialist. She learned, for example, the difference between THC, the cannabis compound, or cannabinoid, that gets people high, and CBD, a cannabinoid that offers therapeutic effects sans psychedelia.

Knox’s husband, David Knox, an emergency room physician for 38 years, kept his day job but also started working at the clinic. He knew nothing about the endocannabinoid system but quickly saw the potential of cannabis as a treatment for epilepsy, cancer-therapy side effects and pain, particularly in the middle of an opioid epidemic.

He also said President Richard M. Nixon’s decision to sign the Controlled Substances Act, which slated marijuana as a schedule 1 drug in 1970, was “one of his biggest crimes.”

“I think a majority of establishment medicine still is not on board with [medical marijuana],” he said. “That’s the way we were taught.”

Meanwhile, some other Knoxes were getting in on the game.

Rachel Knox, 35, and Jessica Knox, 31, seem closer than many siblings. After leaving Portland, where they grew up, they lived together in Boston while Jessica finished her undergraduate degree at Harvard and Rachel did a post-baccalaureate program in preparation for medical school at Tufts. Then both entered Tufts medical school, graduating in 2012 from a dual-degree program that also offered MBAs.

“If we were alone, we might have gotten discouraged and changed our minds,” Jessica Knox said. “Instead, we thought: ‘Oh, my sister’s doing it, I could do it, too.’ ”

After they completed their residencies, Rachel Knox ended up back in Portland, while her sister moved to San Francisco. But telemedicine allowed Jessica Knox to work with her sister and her mom at the American Cannabinoid Clinics, where the family battles the card-mill mind-set. Instead of seeing as many patients as possible as quickly as possible – a model that led to “doctors becoming millionaires,” Rachel Knox said – the family would actually practice medicine with cannabis.

This demands more than teaching patients not to spill the bongwater. Every client is different. Some don’t want to get high or might have anxiety that doesn’t respond well to products high in THC. Those new to marijuana use – “naive users,” as Rachel Knox puts it – might turn to edibles. But marijuana edibles are notoriously easy to overdo, especially if a patient takes them on an empty stomach.

Veteran pot smokers, meanwhile, might wish to turn to vaporizing, which Jessica Knox said “is certainly cleaner, often less harsh, and definitely less stigmatic than smoking.” And all patients should be made aware of the possible side effects of any medication. Like the beneficial effects of marijuana, there is still a lot to be learned about its dangers, such as the risk of lung cancer, cognitive impairment or impaired driving.

“If you’re trying something new for the first time, maybe do that at home on a Saturday when you don’t have to go anywhere and don’t have any responsibilities at home to worry about,” Jessica Knox wrote in an email.
But whatever the chosen remedy, the Knoxes aren’t going to sign a prescription and send patients on their way.

“We want our patients to come to us for guidance, not this card,” Rachel Knox said. “We’re not here to see a patient every five minutes.”

After a year of the Trump administration, the future of patients seeking medical marijuana still isn’t clear. Attorney General Jeff Sessions sought the ability to prosecute medical marijuana providers in states where the practice is legal. Such providers have been protected by federal law since 2014, but those protections expire Friday.

The Knoxes, however, aren’t that worried. While Janice Knox acknowledged that physicians are “in a precarious position” working with a federally controlled substance, 29 states and the District of Columbia have legalized medical marijuana; eight have legalized recreational use by adults. With so many benefiting from the once verboten drug, it’s hard to imagine going back.

“We’re going to plow ahead and do what it’s right for us to do,” she said.