Cannabis farming dates back 10,000+ years, to the very dawn of human society—at least according to famed astronomer (and enthusiastic cannabis consumer) Carl Sagan, who once hypothesized that the plant may also have been the first species ever purposely cultivated.

In his book The Dragons of Eden: Speculations on the Evolution of Human Intelligence, Sagan went so far as to opine that “it would be wryly interesting if in human history the cultivation of marijuana led generally to the invention of agriculture, and thereby to civilization.”

Talk about a game changer!

Perhaps the world’s cannabis dealers and dispensaries can’t lay claim to a cultural legacy as significant as being the catalyst of civilization, but there have certainly been some groundbreaking (often rule-breaking) operations that have helped make this herb available to the masses–all while seriously undermining the destructive stigmas used to justify the plant’s prohibition and the oppression of those who choose to consume it.

After all, kept entirely in the shadows, cannabis can be easily portrayed as dangerous and “other,” with those designations then used as a pretext to persecute entire communities considered undesirable. Keeping cannabis sales confined to the black market also ensures that only criminals buy and sell the plant, reinforcing the notion that such transactions represent a danger to society, rather than a commendable example of the free market making available a safer (and more fun!) alternative to alcohol, tobacco, and pharmaceutical drugs.

Unfortunately, much of the history of cannabis sales has been purposely obscured—from the storied old spice trail trade routes that spread hashish far and wide in ancient times, to the pre-prohibition days of just a century-ago when cannabis tinctures and extracts were widely available in pharmacies.

Our celebration of “game changing” dispensaries will focus on the modern era, with the term “dispensary” used to describe any operation where cannabis is sold consistently and openly with at least tacit approval from the local government.

In many cases, this still required engaging in “civil disobedience”–defined as “a refusal to comply with a law one considers unjust as a form of peaceful protest”–a strategy that has guided the cannabis movement from the darkest days of prohibition into our current era of fully regulated legal cultivation and distribution.

Meaning, if you prefer being treated like a customer instead of a criminal when acquiring your favorite herbal botanical, definitely put one in the air for these game-changing dispensaries, presented here in chronological order. 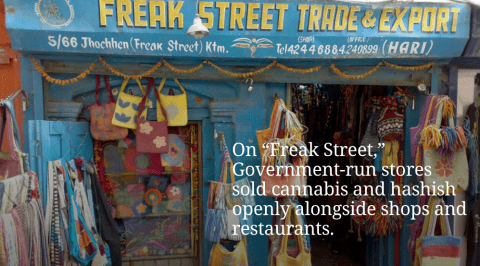 Starting in the late 1960s, seekers, students, and other wandering souls from North America and across Europe began to explore what came to be known as the Hippie Trail, a loosely defined travel route that began in Istanbul and moved over land through Iran, Afghanistan, and India, typically ending with a triumphant arrival in Nepal.

Long a cannabis-friendly city, Kathmandu’s citizens largely embraced this influx by steering freshly-arrived Westerners to what came to be known as “Freak Street.” Here, government-run stores sold cannabis and hashish openly alongside shops and restaurants, catering to budget travelers who also came to get bud.

The good times, naturally, came to an end after the American government, in 1976, put pressure on Nepal’s king to outlaw cannabis and hashish.

In 1972, a Dutch student named Wernard Bruining and some friends exerted squatter’s rights over an abandoned bakery. They transformed it into Mellow Yellow, a teahouse on a small Amsterdam side street that soon drew crowds for its steady supply of hashish, which could be purchased from an employee who posed as a customer.

Asked to explain his motivation for opening the shop, Wernard said:

“We were selling hash to friends from our small apartment in order to have a free smoke ourselves. We had so many visitors, whom we always gave a cup of tea to drink, that the joke was that we should open up a teahouse and at least make some money. So we did.”

Dutch police raided Mellow Yellow several times, without success, as they could never find the shop’s inventory, which was hidden in a nearby bookshop. This apparent success inspired competitors to open, and Mellow Yellow is now credited as the first ever cannabis coffeeshop in the Netherlands.

In January 2017, the iconic shop was forced to close due to stringent new zoning restrictions used to target coffeeshops.

Dennis Peron—who recently passed away—became an icon of the medical cannabis movement through his determined efforts (despite multiple arrests) to provide cannabis to the seriously ill at the height of the AIDS crisis in San Francisco.

His years of community organizing and civil disobedience culminated in 1992 with the opening of the San Francisco Cannabis Buyers Club—a non-profit collective dedicated to supplying cannabis to the seriously ill for free or at a steep discount.

After producing a photo ID and a doctor’s recommendation to enter, club members chose from a wide selection of organic flowers, plus edibles, tinctures, topicals and health food. The Buyers Club also offered on-site consumption, which helped create a sense of community.

“Marijuana is part of it, but a big part of healing is not being alone,” Peron explained.

The San Francisco Buyers Club also served as a center of political organizing for the movement. In 1996, the authors of Prop 215—California’s landmark medical cannabis law—met at the Club frequently to plan strategy. Just months before that historic vote, over a hundred heavily armed police officers raided the Buyers Club, but their tactical assault on a bunch of very ill people backfired, pushing many previously undecided voters to support medical cannabis.

On Election Day, Prop 215 passed by a wide margin.

Described as “the gold standard of medical marijuana” by a federal judge, the Wo/Men’s Alliance for Medical Marijuana in Santa Cruz, California was founded in 1993 by Mike and Valerie Corral after they discovered that cannabis helped control Valerie’s otherwise debilitating seizures.

Following a pair of arrests for cultivating their own supply, the then-married couple determined to create a collective to help others facing the same struggle.

Over time, and with the support of the local authorities, WAMM would play a leading role in the passage of Prop 215, and grow from a small group of determined citizens into a working model of a compassionate collective with thousands of members, that provided cannabis for free or on a sliding scale to those in need.

In 2002, the DEA raided WAMM’s garden and arrested Mike and Valerie Corral. Facing federal charges, they stood their ground. Two weeks after the raid, on the steps of City Hall, with the mayor of Santa Cruz by their side, WAMM distributed medical cannabis to its terminally ill members, daring the DEA to arrest them again–this time in front of the assembled community and a huge media presence.

After the DEA failed to show up, WAMM successfully sued the Department of Justice with help from the ACLU, creating an important victory for the medical cannabis movement at a time when raids and arrests remained commonplace. Sadly, and somewhat ironically, WAMM has been closed since January 1st of this year as the collective navigates the many new distribution regulations imposed by the state of California.

Founded in 2006 by longtime activist and underground cannabis distributor Steve DeAngelo, Harborside Health Center first changed the game by inviting the press and local politicians into a large, welcoming retail operation that served as a “model dispensary” for the industry.

On January 1st, Harborside celebrated the start of adult-use sales with a major event that included representatives from local government, longtime activists, and a mariachi band. Former federal prosecutor Henry Wykowski—who has served as Harborside’s counsel in several of its legal battles with the government—bought the first legal gram of “recreational” cannabis sold in the state.

Kayvan Khalatbari started up Colorado’s second oldest cannabis dispensary in 2009 “with a $4,000 investment and a quarter-pound of cannabis.” With roots in both the underground economy and the grassroots legalization movement, Khalatbari decided to use his entrepreneurial skills not only to build a business empire (in addition to Denver Relief dispensary, he’s founded a successful pizzeria, a free arts magazine and a cannabis consulting firm), but also to give back to the local community.

Denver Relief has since set a progressive standard for medical cannabis dispensaries in Colorado, the first state to fully license and regulate them, including working to “green” the often energy and resource intensive process of indoor growing.

Also, as the driving force behind Sexpot Comedy, he helped foster a thriving local comedy scene in Denver by marketing his pizza and cannabis with community events and local culture rather than hype and advertisements.

Denver Relief was sold to Terrapin Care Station in 2016. Today, Khalatbari is running for mayor of Denver on a platform that emphasizes his activism around homelessness, the arts, and cannabis.