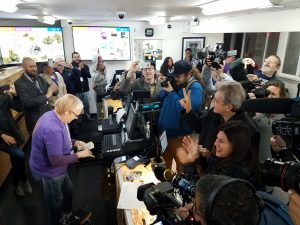 Marijuana Business Daily reporter John Schroyer is on the ground in Berkeley, California, and will post live updates throughout New Year’s Day from the longest-operating medical cannabis dispensary in the country – Berkeley Patients Group (BPG).

Scroll down for a front-row seat to the challenges and successes BPG experiences on its first day selling recreational marijuana as well as insight on the launch of California’s recreational marijuana industry, which Marijuana Business Daily estimates could generate at least $4 billion in annual retail sales in several years. (All entries are in pacific time)

Also, check our Part 1 and Part 2 of our series on on BPG’s transition from California’s unregulated marijuana market to a statewide regulated industry.

“Medical marijuana killed the black market. This is bringing it back,” said the customer, as he was walking out of BPG.

He said he purchased a gram of hash for $13, which he said used to cost him $10 as a medical cannabis card holder.

“I almost didn’t even buy this,” he said.

The customer, who asked to be identified only as Kamal, said he thinks the state is shooting itself in the foot with the high tax rates, and that simple cost will drive plenty of consumers to illegal dealers as opposed to tax-paying retail outlets like BPG.

“It makes no sense,” he said, shaking his head.

“Most of my anxiety has to do with sticker shock,” he said.

When asked just before 7 a.m. if he had already encountered customers questioning the higher prices due to the new taxes that went into effect Jan. 1, he nodded.

“It just happened. A guy was looking at his receipt and saying, ‘Where are all these taxes coming from?’” Schick said.

But, he added, he’s optimistic that the Berkeley City Council will be lowering the local cannabis tax rate in the near future, to avoid just that kind of disincentive to potential customers of legal MJ retailers.

Schick also said he’s not sure how much of a boost in customer traffic BPG will see New Year’s Day, but added that on average, the dispensary gets 400-700 people per day.

When asked what he thinks that number may climb to today, he responded, “Let’s go with a thousand-plus. That’s what we see on holidays.”

Schick also said it’s difficult to predict how much BPG – and other retailers in the Bay Area – may see sales increase due to adult use. He said he thinks those in Southern California are going to see more of a spike just because of the much-larger population base.

As of 7 a.m., there were still several dozen customers lined up either in BPG or outside, but the shop wasn’t exactly mobbed. There were about 25 people outside and another 15 or so inside waiting to make purchases.

And the newly-rolled out BPG vending machine had a few initial hiccups, but then quickly got working once employees started spreading the word to customers that the machine won’t take $100 or $50 bills.

About 25 customers were lined up before 6 a.m. New Year’s Day in front of Berkeley Patients Group, the longest-operating medical cannabis dispensary in the United States, in anticipation of the retailer beginning full adult use marijuana sales at the top of the hour.

And BPG did not disappoint. After a ceremonial ribbon-cutting with Mayor Jesse Arreguin, longtime MJ legalization activists and Bay Area residents Chris Conrad and his wife Mikki Norris made the first purchase. Employees jokingly counted down the seconds until 6 a.m., the earliest that state regulations allow for rec sales to start, and cheers erupted when the transaction was finalized.

Conrad and Norris held up their exit bag and receipt for a gaggle of reporters and photographers who were on-hand for the historic moment.

“I’m totally thrilled,” Conrad said about 15 minutes before the purchase, when asked how he felt on the first morning of adult use sales. “It was well worth turning down a party last night to be here early.”

Customers Chris Conrad and Mikki Norris, who made the first purchase, showing off their goods. (Photo by John Schroyer)

Conrad said he doesn’t think BPG will see a lot of traffic from other states or countries on the first day of legal sales, since he believes the novelty of being the first went out the door in 2014, when Colorado became the first U.S. state to launch full adult use cannabis retail operations.

“I think we will see some tourism, but it’s not going to be as big as if we’d just legalized in 2010 the way I’d hoped,” Conrad said, referring to a legalization ballot measure, Proposition 19, that failed that year. Proposition 64, which legalized recreational MJ, was passed by California voters in 2016.

The pair bought a few pre-rolled joints and a chocolate Kiva bar.

BPG operations director Roger LaChance was working until the very last minute with employees to make sure they were familiar with how to properly ring up new customers, and how to change up the cashier system depending on if the customer was buying MMJ or rec.

LaChance said he wished he’d had another two months for prep work, but added that he’s confident that their newly-installed MJ Freeway point-of-sale system works and that the shop has plenty of inventory.

“There’s always a tiny bit of anxiety… but I think we’ve done everything we could,” LaChance said.

When asked how much inventory BPG had stockpiled for New Year’s Day, LaChance merely smiled and said, “Enough.”

Here’s a look at what happened Sunday night in the lead up to today’s first rec sales.

At 9:30 p.m., half an hour after Berkeley Patients Group closed for business, plenty of the dispensary’s employees were still hard at work, prepping for the big start of adult-use marijuana sales at 6 a.m. Monday.

The roughly 10 or 15 employees still on site were mostly doing inventory counts to ensure that their computer records matched the amount of product the retailer had on hand, said Raymond Owens, BPG’s facilities coordinator.

BPG – along with the other few retailers lucky enough to get licenses to sell MJ on Jan. 1 – was going the extra mile to make sure it’s in compliance with all the necessary rules and regulations.

That’s also going to include more last-minute training the morning of Jan. 1 for employees to ensure everyone is on the same page regarding sales procedures and other protocols for the first day of rec sales, Owens said.

Dispensary employees also spent Sunday testing out and stocking a cannabis product vending machine that they hope will help expedite customer sales. The machine, which BPG is renting, is emblazoned with the company logo and carries a solid variety of products, ranging from pre-rolled joints to vape cartridges to edibles.

Other preparations were also still being made as well.

BPG’s director of government affairs, Sabrina Fendrick, showed up just before 9 p.m. on New Year’s Eve with a U-Haul truck full of decorations for the launch of recreational sales, including a long green carpet to be rolled out for customers, big decorative inflated initials that spelled out “BPG,” and a banner with BPG’s logo and the hashtag “Weeddidit” that visitors will be able to take photos in front of before or after they make purchases.

Fendrick even rounded up a bright green ribbon and over-sized ceremonial scissors for the city’s mayor to cut the ribbon with, a plan to be executed right at 6 a.m., when the store will legally be allowed to open to the public.

Most of the décor, however, was left until the wee hours of the morning, since about 30 employees will be showing up for their shifts between 4 a.m. and 5 a.m., Owens said.

“All the last minute decorations is the fun stuff,” Owens said with a tired grin on New Year’s Eve. “But all that’s going up tomorrow morning.”