Skip to Content
Home All Posts News Which city consumes the most marijuana in the world?
Share
0 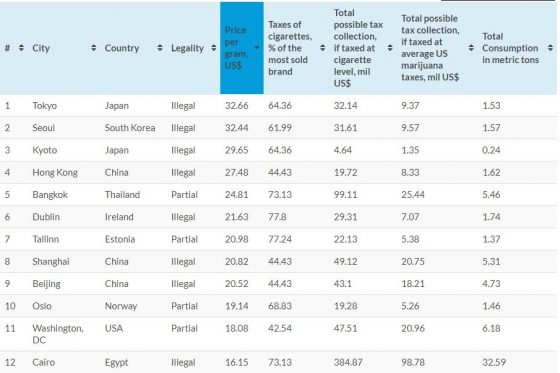 The biggest cities in the world stand to make a lot of money from marijuana legalization.

That’s the takeaway from an economic study cultivation tech company Seedo published following the 2018 Cannabis Price Index detailing the cost of marijuana. It looks at marijuana use, legality, cost, and calculates the potential taxes in 120 cities across the world.

New York City consumes the most cannabis in the world, ingesting/smoking a whopping 77.44 metric tons annually. While population is obviously the biggest factor, the city’s cannabis consumption is three times that that of American runner-up Los Angeles, which consumed 36.06 metric tons.

Denver barely cracked the top 10 for U.S. cities, consuming 6.2 metric tons, according to the study.

The amount of marijuana consumed wasn’t the only factor Seedo looked at. Price per gram in each of the cities was also examined.

No surprises here: The legal marijuana states had the most affordable marijuana per gram. Seattle was lowest at $7.58 per gram, Denver next at $7.79 and Los Angeles comes in third at $8.14.

Partially-legal city Washington D.C. had, by far, the most expensive price per gram in the country at $18.08.

Internationally, where weed remains illegal, prices soar. The most expensive marijuana per gram is found in Tokyo, Japan, at $32.66 USD per gram. Jet down to Quito, Ecuador, for the cheapest marijuana on the list, costing just $1.34 USD on average.

Using the current average tax rates on legal marijuana in America, Seedo researchers calculated how much big cities might rake in if it was legalized, taxed and regulated. New York City topped the list at $156.4 million in hypothetical taxes.

If the current tax rate on cigarettes in American were to be applied to legal marijuana, that number more than doubles. In New York City, for instance, would haul in over $354.4 million annually.

Seedo, a tech firm behind an DIY cultivation device, does have a fiduciary interest in cannbis and the company doesn’t sugarcoat their mission: “The aim of this study is to illustrate the continuous need for legislative reform on cannabis use around the world, and to determine if there are any lessons to be learned from those cities at the forefront of marijuana legalisation.”