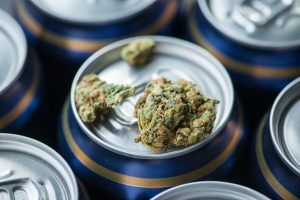 A Toronto craft brewer has partnered with one of the largest medical cannabis companies in Canada to create a “cannabis-inspired beer” in a project that could be the start of cross-industry collaboration on product development and branding in the nation.

It’s the first time a Canadian licensed cannabis producer has worked with a local craft alcohol maker to introduce a beer.

Such collaboration already has occurred in the United States.

Darren Karasiuk, vice president of strategy for Ontario-based MedReleaf, told Marijuana Business Daily his company worked with Toronto’s Amsterdam Brewing Co. to figure out the right blend of hops and malts “that would give it a subtle hint of some of the cannabis flavors.”

The beer “contains no cannabis at this point in time,” he said. It is called 4:20 Pale Ale.

He also noted that “as regulations allow, absolutely we will be looking at ways to introduce cannabis to all sorts of different form factors that are going to be appealing to” consumers.

Recreational marijuana is on schedule to be legalized in Canada this summer, but infused cannabis products will be brought into the legal fold within a year of the launch of the recreational industry.

Financial terms for the MedReleaf partnership, including revenue sharing, were not disclosed.

MedReleaf’s role in the project is to:

Amsterdam’s duties are to:

MedReleaf lists as LEAF on the Toronto Stock Exchange.

The Canadian marijuana market already has had a preview of the prospect for cannabis-infused alcoholic beverages.