Although several sources claim Cory Gardner to be a threat to National Security in face of the ongoing turmoil between he and Attorny Jeff Sessions with relation to the now rescinded Cole Memo, these claims fall short in acknowleding Gardner’s real motive to protect state regulation.

After a fruitless meeting on cannabis policy with US Attorney General Jeff Sessions, a Republican senator from Colorado is sticking to his aggressive checks-and-balances approach to stopping Sessions’ attack on state-legal cannabis.

US Sen. Cory Gardner has so far successfully blocked as many as 11 Trump administration appointees to the Justice Department by preventing them from making it to a Senate floor vote. His actions make good on a pledge he made a month ago to obstruct DOJ nominees until Sessions softens his stance on state cannabis laws.

Gardner’s threat came in response to Sessions’ Jan. 4 decision to rescind the Cole memo, an Obama-era DOJ policy that insulated legal-cannabis states from federal interference. Gardner has maintained that Sessions promised him that he would leave the guideline intact. 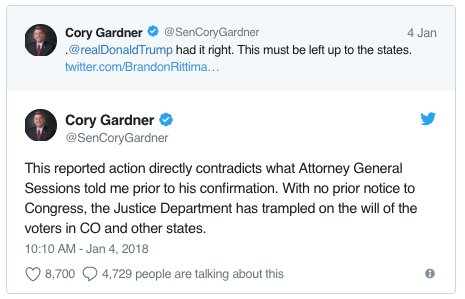 Gardner and Sessions met last month to discuss their differences on cannabis, but reportedly neither side gave ground. “I think the meeting kind of went as I expected to,” Gardner told Denver7. “I shared my states’ rights position with Attorney General Sessions, and he shared his concern about the Cole memorandum and why he rescinded it.”

While meetings continue between staff members for Gardner and the DOJ, so too does the senator’s blockade. If it continues, more than 20 other nominees for Justice Department-related jobs could get caught in the jam, the Denver Post reports.

US Sen. Chuck Grassley (R-Iowa), who chairs the committee responsible for pushing the nominations through, told the Post there’s little indication that the freeze will thaw anytime soon. “It may never resolve itself,” Grassley said.

By some measures, Gardner is an unlikely champion of state cannabis laws in the face of the Trump administration’s threats. He opposed Colorado’s own legalization measure in 2012 and has voted in line with President Trump’s position nearly 95% of the time, according to FiveThirtyEight. His decision to freeze Justice Department nominations will undoubtedly impact other Trump administration priorities. But so far, he’s standing firm.

“As you know, I opposed the legalization,” he told the Denver Post after his meeting with Sessions fell flat, “but the fact is, this is a states’ rights decision, and that’s the message I delivered very clearly to today to the attorney general.”

Gardner has also come out in support of various measures in Congress that would protect state-legal cannabis from federal meddling. It’s unknown whether the success of any of those measures would be enough for Gardner to remove his block on Justice Department nominees.

Grassley told the Denver Post he disagreed with Gardner’s decision, but “I can understand why he did it.”