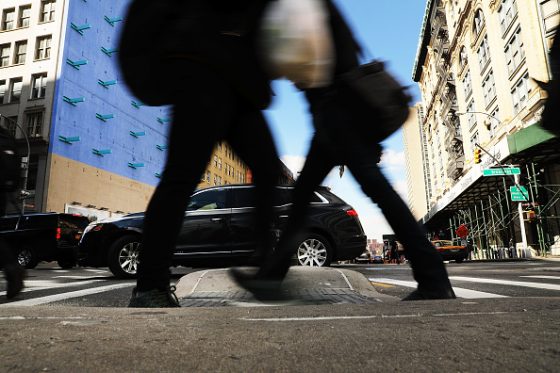 On Monday, 4-year-old Abigail Blumenstein and 1-year-old Josh Lew were struck and killed by an out-of-control car while crossing the street with their parents in Brooklyn.

The driver, who police say may have been experiencing a medical condition, ran a red light before striking the pedestrians, according to NBC New York. Since 2016, the driver’s car has been issued four summonses for red light camera violations, and four more for school zone speeding violations, according to public records viewed by Staten Island Live.

The incident underscores a troubling trend in road safety in recent years: After decades of decline in the rate of fatal car accidents, numbers have crept back up in recent years. The trend is particularly pronounced for pedestrian fatalities: In 2016, the most recent year with complete Transportation Department data, nearly 6,000 pedestrians were struck and killed by vehicles on public roads.

Experts suspect the increase is driven by a number of factors. Last month, the Governors Highway Safety Association released a report noting that rising pedestrian fatalities are correlated with the growth in smartphone adoption and use. Although deaths related to distracted driving are, on the whole, trending downward, smartphone use could be affecting pedestrians, too, by making them less aware of their surroundings.

Substance use is another factor. The GHSA specifically calls out marijuana use, noting that in the first half of 2017, pedestrian fatalities increased greatest in states that had previously voted to legalize recreational marijuana. Like smartphones, marijuana can impair both drivers and pedestrians.

But looking at state-level data for all of 2016, there isn’t any clear correlation between marijuana legality and pedestrian deaths. States in the southern half of the country generally have higher rates of pedestrian fatalities than more northern states.

Related: Colorado is asking marijuana users why they drive high

Alcohol is another known factor in pedestrian fatalities. Eighteen percent of drivers involved in fatal pedestrian crashes tested positive for alcohol, compared with 38 percent of pedestrians involved in these crashes, according to a report from the National Highway Traffic Safety Administration. When a driver strikes and kills a pedestrian, in other words, the pedestrian is more likely to have consumed alcohol beforehand than the driver.

Less-affluent cities may have less money to spend on safe, walkable street design, which appears to be a factor in pedestrian deaths.

One final factor is vehicle speed. Faster driving is correlated with both higher rates of pedestrian accidents and a decreased chance of survival for pedestrians who get struck. For these reasons, New York City lowered its default speed limit from 30 to 25 mph in 2014. That program appears to be bearing fruit: In 2017, the number of pedestrians killed in traffic accidents in New York City fell to its lowest level since 1910.