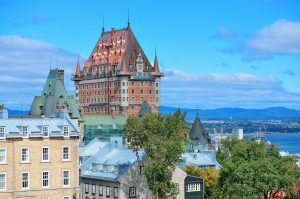 Quebec has entered into a multiyear agreement with at least one licensed producer to lock up marijuana supply for the province’s retail and online recreational stores, according to a regulatory filing released Tuesday.

Ontario-based MedReleaf disclosed it has signed a letter of intent with Société des alcools du Quebec (SAQ) to supply 8,000 kilograms of cannabis products per year over a three-year term. Financial terms were not disclosed.

The SAQ is a Montreal-based liquor distributor, but it created a subsidiary, Société des cannabis du Quebec, to handle marijuana distribution.

With adult-use legalization in Canada looming late this summer, the province is the largest market to start securing a cannabis supply so far.

Aggregate demand in Quebec is estimated to be roughly 100,000 kilograms (220,462 pounds) annually, but the regulated market is expected to take a number of years to overtake black-market sales.

MedReleaf, based in Markham, Ontario, said in its filing with Canadian securities regulators that six suppliers have signed deals, but it was unclear if the company was referring to Quebec or Canada as a whole.

Neither the SAQ nor MedReleaf were immediately available for comment.

MedReleaf said the SAQ selected “producers” to provide cannabis and a “broad assortment of products that cover a range of price points and experiences.”

Other large producers with a presence in Quebec include Hydropothecary, Aurora Cannabis and The Green Organic Dutchman.

MedReleaf and Aurora are traded on the Toronto Stock Exchange under the symbols LEAF and ACB, respectively.

Hydropothecary is traded on the TSX Venture Exchange as THCX.