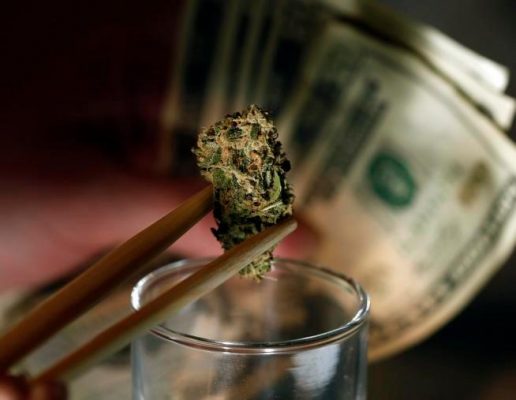 Colorado’s southern border communities led the the state in 2017 per-capita cannabis sales — by a country mile.

While the bulk of Colorado’s $1.09 billion in 2017 recreational marijuana sales occurred in the state’s population hubs of Denver and Arapahoe counties, rural Las Animas County, population 14,083, led the state with more than $3,100 of recreational cannabis sold for every adult and child.

Las Animas County, which is on the Colorado-New Mexico border and bisected by Interstate 25, isn’t the only border county experiencing a green rush. An analysis of sales data by The Cannabist and Brian Keegan, a computational social scientist at the University of Colorado, show that three of the five counties with the highest per-capita sales of recreational marijuana are situated along Colorado’s southern border.

“I think the one thing that jumps out is Las Animas has this huge disparity,” Keegan said. “And the fact that it’s on the New Mexico border would seem to suggest people are coming up and buying things there — whether or not it crosses state lines.”

The mountain communities of Ouray and Summit county tallied the third and fourth highest per-capita sales at $797 and $740, respectively. Populous Denver and Arapahoe counties, which accounted for 40 percent of the state’s recreational sales, had per-capita totals of $532 and $173, respectively, according to the analysis.

Lofty per-capita sales totals are not out of the norm for small Colorado towns with a close proximity to the border, said Shannon Gray, marijuana communications specialist for the Department of Revenue.

“Department of Revenue and its Marijuana Enforcement Division are constantly monitoring marijuana activity across the state to protect public safety,” she said. “The (per-capita data) referenced indicate sales to the consumer, so it would not necessarily be an indicator of diversion.”

Sales data can be indicators considered as part of a risk-based analysis of licensee, she said, noting that other factors include seed-to-sale tracking data, inspection history and compliance history.

For Trinidad, which is home to Las Animas’ two-dozen recreational marijuana shops, the industry has been an absolute boon, said Greg Sund, city manager.

The interstate traffic, notably visitors from New Mexico and Texas, are what drive sales to the city’s marijuana industry, he said.

Hotel and motel occupancy rates are up, and restaurants have seen a boost in business, he said.

“We just continually revise what we thought we were going to get from marijuana taxes,” he said. “It just kept ratcheting up all through the year.”

The more than $43.9 million in recreational cannabis sold in Las Animas County during 2017 bested the $40.1 million sold in nearby Pueblo County which has 12 times the population of Las Animas.

Trinidad collected $2.9 million in marijuana tax revenue in 2017, Sund said. The city initially budgeted a tax boost south of the $1.4 million collected in 2016.

That money has been put toward a slew of one-time and short-term projects — items that have been shelved for years, he said. The revenue from marijuana has resulted in additions to the city vehicle fleet, a building shell for a new animal shelter facility, a ladder truck for the firehouse and played a part in the redevelopment of a city block into 41 live-work units, he said.

“These types of efforts help draw focus to activity in town,” Sund said. “I think it just helps general attitudes.”

At the same time, city leaders have been reticent to build the marijuana tax collections into the city’s general fund, he said.

“Something that’s going up this fast is going to level off or come down,” he said.

As Trinidad welcomes the economic boom from its newest sector, city officials also are building the foundation to bolster leisure-recreational offerings, he said.

“We strongly recognize the need to diversify the economy,” Sund said, noting a previous reliance on industries such as coal and gas that are prone to boom-and-bust cycles.

It would not be prudent for Trinidad’s future to bank on one industry — especially one with many unknowns on the federal level, he said, noting U.S. Attorney General Jeff Sessions’ recent rescission of the Obama-era guidance on marijuana enforcement priorities.

“All of those unknown factors make people feel uneasy that this is a solid long-term enhancement to our economy,” he said.

Colorado’s marijuana shops raked in $1.51 billion sales of medical and recreational flower, edibles and concentrate products during 2017, according to Colorado Department of Revenue data released Friday.

Adult-use sales topped $1.09 billion during the record year, with the remaining $416.52 million coming from medical marijuana. Colorado collected upward of $247 million in taxes and fees revenue from marijuana sales, according to state finance data.