We will explore individual Oregon categories in greater detail in coming weeks, but let’s first examine the broad market. Where is the industry growing in Oregon, where has it stalled, and what are opportunities looking ahead?

Big picture: Consumers dropped $507.95 million on cannabis products in Oregon during 2017, pushing growth to 26.5 percent over sales in 2016 according to cannabis market research firm BDS Analytics. Meanwhile, growth of units — that is, individual products rather than dollars — grew by just 16.4 percent. Translation: With dollar growth outstripping unit sales, at least some categories saw boosted prices. 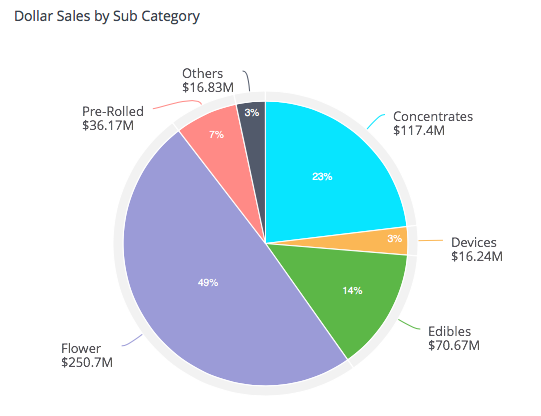 Of the broadest categories, flower still dominates in terms of market share, with 49 percent of the cannabis market. But flower’s market share in 2016 was 63 percent, and growth in terms of dollars during 2017 actually fell by 0.1%, on sales of $250.7 million even as volume of 30.33 million grams represents growth of 12.4 percent.

Other categories picked up flower’s slack.

Concentrates, with 23 percent of the cannabis market, grew by 70 percent on sales of $117.7 million, while volume rose by 42.5 percent. With dollar sales rising far in advance of unit sales, that means concentrate prices rose during the year.

The big story out of Oregon, however, is edibles. In Colorado and Washington, growth in edibles has remained fairly low for several years. It always is a strong category, but growth is usually not as explosive as it is for concentrates in these states. But Oregonians went another direction during 2017 with edibles.

Consumers spent $70.7 million on edibles during the year, which accounts for growth of 150 percent and pushed market share to 14 percent. At the same time, unit sales grew by 22.5 percent. Again, just as it was for concentrates, this means prices for edibles rose during 2017. 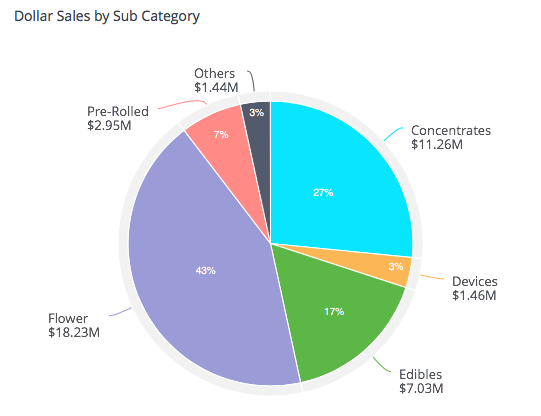 Looking back at the last month of 2017 — December — offers glimpses of what lies ahead for Oregon.