Skip to Content
Home All Posts News Op-ed: Jeff Sessions is a hypocrite on states’ rights. But so is everyone else
Share
0 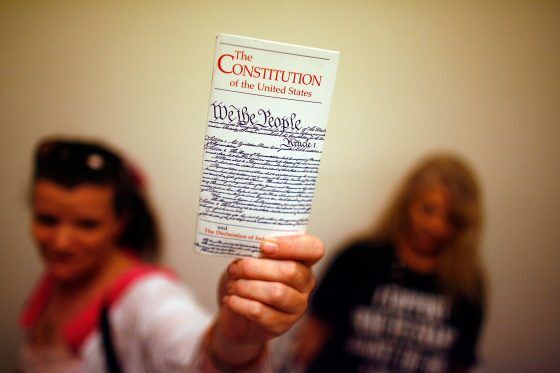 By Benjamin E. Park, Special To The Washington Post

In the first week of 2018, Attorney General Jeff Sessions targeted legalized marijuana throughout the nation. As a politician known for his hatred of the drug, this came as no surprise. However, as a former senator from the South known for trumpeting the sovereignty of state power over federal overreach, his defense of vigorous national control, in this case to overturn practices that had been initiated by state ballots, seems contradictory, even hypocritical.

But the history of federalism has been filled with such contradictions that reveal how parochial interests frequently trump national ones in U.S. politics. Appeals to state sovereignty stem from a fear that the federal government does not properly understand or respect regional interests and from a desire to protect those interests. However, the appeal to state sovereignty is often rooted in more shortsighted mind-sets that generate distrust and division rather than a coherent, consistent political philosophy of “states’ rights.”

Understanding this tumultuous history of federalism offers an acute example of how we define the nation – which, in turn, reveals how we define what it means to be American.

The states’ rights doctrine – or the belief that the federal government should not infringe upon state interests – became ideologically attached to the U.S. South after the Civil War. Southerners tried to mask the centrality of slavery and white supremacy to the Confederate cause, inventing the myth that the war was about federal power. Segregationists built on this idea, opposing federal attempts to end segregation and racial discrimination over the next century.

But in the first few decades of the country’s existence, the most strenuous calls for state supremacy actually came from the region now synonymous with the support of federal power: New England.

About two decades after the United States gained her independence, many citizens in the northeastern states feared they might have been party to a raw deal. When the government was formed and the Constitution ratified, they had hoped there would be a balance of power among the northern, middle and southern states. Yet a series of events and circumstances led them to doubt that assumption.

First, the constitutional compromise that allowed states to count each enslaved individual as three-fifths of a person in the electoral college and congressional representation assured that southern states would have a profound influence in federal politics. New Englanders originally agreed to the compromise because they believed the financial benefits would overshadow cultural differences. But the South’s resulting political dominance caused concern, especially as Jeffersonians began to dominate the western regions.

Though the New Englander John Adams won the presidency in 1796, Thomas Jefferson and then James Madison gave Virginians a hold on the White House for the next 12 years.

New Englanders did not welcome this turn of events. “It is written in the volume of fate,” wrote one Massachusetts senator, “that a President is never again to come from New England.” Things seemed dire as they felt their voices being lost on the national stage.

Western expansion, and the growth of population that came with it, was another threat to their power and influence. Even before the addition of the Louisiana Territory in 1803, which doubled the borders of the United States, Americans raced past the Appalachian Mountains to create new territories and, eventually, states. Within a couple decades, Kentucky and Tennessee alone claimed more people than New England.

While Southerners such as Thomas Jefferson celebrated the growth as “renovation,” Northeasterners feared a conspiracy. Did the new citizens, teamed with Southerners, mean the further eclipse of New England’s voice in democratic politics? “The Virginia faction have certainly formed a deliberate plan to govern & depress New England,” hypothesized Massachusetts politician Stephen Higginson, “and this eagerness to extend our territory and create new States is an essential part of it.”

These escalating tensions climaxed with the War of 1812.

Hoping to secure the western frontier, annex the northern Canadian territories and reaffirm sovereignty in the Atlantic, Jefferson and his successor, Madison, took increasingly aggressive stances toward the British Empire. This included an embargo in 1807, which threatened New England trade with England.

Each federal move to punish the British made many New Englanders feel their interests were being ignored. Massachusetts congressman Abijah Bigelow complained that the “southern” and “western” people, who were “most zealous for war,” were leading the nation to ruin.

At a convention in Hartford, Conn., in December 1814, Federalists formulated their demands. Although the proceedings of the convention were kept secret, the ideas that came out of it were clear: The federal government had trampled upon their states’ rights, western expansion threatened to fundamentally transform the nation’s priorities, and it was time for the United States to return to policies that privileged northeastern states. They proposed a series of amendments that would assure their interests in the future.

First, they recommended a higher barrier for admission for western states, with a two-thirds congressional vote required. New Englanders were originally in favor of western expansion when they thought that Federalist policies would dominate the region. But they changed their tune now that Jeffersonian Republicans claimed both the South and the West.

Furthermore, they recommended changes to limit the participation of those people populating these western states. The current practice of “easy admission of naturalised foreigners” was diluting the common American character and shared culture, they contended.

The convention also tried to limit federal power. Trade embargoes could not last longer than 60 days, and a declaration of war would require two-thirds congressional approval. And to curtail Virginia’s executive dominance, they argued that no president should be able to serve more than one term, and successive presidents should not come from the same state. Federal authority was to be both divided and restricted.

Hartford’s proposed amendments reflected a particular vision for how a nation operated.

Those involved believed that national government required all citizens to have the same interests, priorities and values. An empowered federal government, if composed of individuals who espoused competing beliefs, could only be a menace. Virginian tyranny, western expansion and “naturalised foreigners” all represented threats to a coherent national body.

The Hartford Convention was organized to capitalize on a moment of national weakness, but the delegates had poor timing.

Within days of reaching the nation’s capital with amendments in hand, word arrived from Europe of a peace treaty with Britain. With the war over, instead of holding a position of strength, the Hartford Convention now appeared a den of traitors. Onlookers believed New Englanders had tried to manipulate the nation in the middle of war to better their own political condition.

New England politicians spent the next few decades trying to atone for the public humiliation and reassert their nationalism. But instead of disappearing, the states’ rights arguments merely moved south. South Carolinians – who might have been all too willing to brand the New Englanders traitors – happily picked up the torch during their fight against federal tariffs in the 1830s, and other Southern states joined the cause when it proved beneficial to protect their slave institution. The political philosophy has remained active in the United States ever since – frequently encouraging conspiracy theories rather than stimulating productive discussions of governance.

Jeff Sessions’ vacillating attachment to states’ rights is only the most recent example of this dynamic tradition. It is unlikely to be the last. As long as it is politically expedient to champion local priorities over national interests, there will be many who draw from this long and contested rhetorical strain.

And every time the idea appears in a substantive way, it again questions the nature of the country’s national cohesion. New England politicians could only learn their lesson in the wake of defeat. One can only hope modern Americans can be wiser.