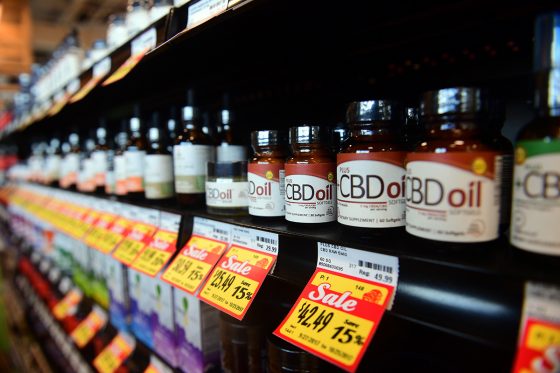 Nearly 25 years after the founder and former CEO of Boulder’s Third Street Chai introduced consumers to a largely unknown beverage, Simmons is putting his back into a new product push: He’s all-in on a cannabis extract hailed for its medicinal properties but facing a regulatory future yet to be determined.

The duo are among an intrepid class of natural products pioneers determined to bring cannabis-derived extracts rich in non-psychoactive compounds and cannabinoids such as cannabidiol — known as CBD — to grocery store shelves.

Expo West, the industry’s largest trade show, served as the coming out party for CBD and brands like Weller Snacks.

The 20-plus hemp extract products that debuted there didn’t much resemble the marijuana-derived CBD oils and tinctures found in dispensaries elsewhere in California — or any of the seven other states with legal adult-use marijuana sales.

Instead, the CBD-infused products on display at Expo West included honeys, sparkling juices, flavored waters, and pet and horse botanicals. The hemp extracts used in these products are marketed much like turmeric, Omega-3s or garlic are marketed as health- and wellness-enhancing ingredients.

The hemp extract-enriched coconut bites developed by Simmons and Oscamou are designed for occasional consumption by adults for the purposes of making them feel “weller,” Simmons said. Each serving contains 5 milligrams of extract, sourced from an Oregon hemp farm run by Frederick Schilling, the founder of Dagoba Chocolate, an organic chocolate company that was bought by The Hershey Co. in 2006.

The learning curve, risks and unknowns of marketing hemp extracts are similar to those Simmons faced with chai back in 1995.

This was the first year that Expo West formally embraced cannabidiol. Beyond opening the floor to hemp extracts, organizers dedicated a half-day seminar to the business opportunities, potential health-and-wellness benefits and legal uncertainties of the cannabis compound.

The inaugural “CBD Summit” saw producers and pundits project bountiful sales growth. But they also swaddled their bullishness in reticence, noting pitfalls such as the limited research available and labeling semantics that could be regulatory no-nos.

“There’s more hype right now than there is real, solid science,” he said.

But the hype is real for natural product stores, where hemp extracts are growing at an annual clip of 300 percent, said Sean Murphy, publisher of Hemp Business Journal.

That’s good news for mom-and-pop health foods shops such as Adele’s Naturally in Evansville, Ind., which is “1,200 square feet, soaking wet” and “selling a whole lot of CBD,” according to store manager Jordan Fink.

Since Adele’s started selling hemp extracts last fall, the store has been hard-pressed to keep the products on the shelves, Fink said. On some days, dozens of customers line up for the FedEx truck to arrive with a new shipment, he said. Adele’s also continued selling the products despite Indiana Gov. Eric Holcomb’s calls for their removal.

Similar anecdotes have been flying across the natural products scene.

CBD has been on the radar of Barlean’s “for several years,” Lessard said. Healthy oils have been The company’s schtick for 29 years, so adding hemp extracts wasn’t too far of a leap, she added.

The massive trade show was a good gauge of retailers’ appetite for hemp extracts, Lessard said.

“We had some stores (sign on) that we’ve been courting for a little while,” he said. “We had some large chains that were very interested. The market’s definitely changing or moving in the right direction.”

The U.S. Drug Enforcement Administration has said CBD is illegal, and the agency stirred confusion in the industry in December 2016 with the filing of a rule notice for the creation of a Controlled Substances Code Number for “marihuana extracts.”

The natural products industry’s risk tolerances haven’t been high enough to stomach the notoriety and potential for enforcement actions that come with these products, Runestad said.

Late last year, however, Colorado-based Lucky’s Market made a big splash by launching dozens of CBD-rich extract products at its two dozen grocery stores located across the United States.

The more sizable retailers have yet to follow suit. But if the buzz at Expo West proves true, that could change in a matter of months.

The makers of Weller Snacks, for one, are not waiting for retail acceptance.

In January, Simmons and Oscamou raised more than $1 million to get Weller off the ground, U.S. Securities and Exchange Commission filings show. The equity infusion, $1.25 million in total, came from Michael Dearing, a former eBay executive, Simmons said.

“It’s a complex retail environment and a complex regulatory environment, and it’s evolving day by day,” Simmons said. “So it’s hard to say it has the same runway as other ingredients do. But because of the dynamic aspects of the ingredient, you could say that it has the potential to eclipse a typical trend ingredient.”

Simmons sees parallels between the inception of Weller Snacks and the launch of Third Street Chai in 1995.

These days, Boulder isn’t just a natural foods hub, it’s also a haven for tech startups and giants, including Google. Combined with Colorado’s adult-use cannabis regulations, the region is ripe for acceptance of hemp extracts for health and wellness, Simmons said.

“Boulder is the place where trends and product categories are incubated and launched nationwide,” Simmons said. “There’s this palpable excitement around this category that is reminiscent of early natural products.”

Part I – Forbidden medicine: Caught between a doctor’s CBD advice and federal laws

Part III – With DEA digging in its heels on “marijuana extracts,” legality of CBD oil on trial in federal courts

Part VII – Cannabinoids on local grocery shelves, but for how long?