Skip to Content
Home All Posts News Non-U.S. citizens advised to stay away from jobs in Colorado marijuana industry
Share
0 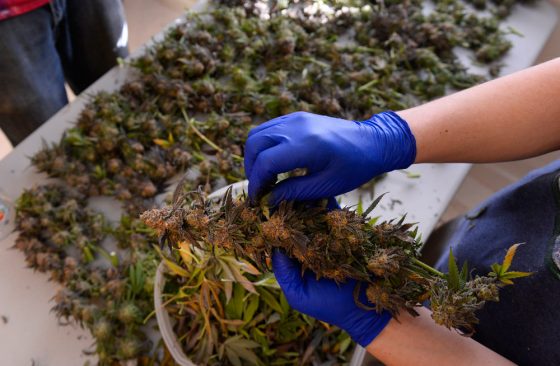 DENVER — Marijuana may be a multi-billion dollar industry in Colorado, but cannabis is still illegal federally — so any job in the industry can be considered trafficking in a controlled substance. Normally, this hasn’t been a tricky distinction for the industry’s state-licensed employees, except by one standard. Their immigration status.

Simply having a job in a dispensary or grow house can get a legal resident, or other immigrant, deported and banned from the U.S., sometimes for life.

Flo remembers being reluctant, at first, to pursue a job in the marijuana industry. This story does not use his full name, or the name of his employer, because of the questions surrounding immigration status and work in the industry. Flo came to the U.S. on a student visa to study English and live closer to his girlfriend, who was an American citizen. A neighbor who worked for a marijuana grow encouraged him to dip his toe in the water.

It took him about a month to convince Flo, “because it’s not really what I wanted to do,” he said. Back in France he worked at a recycling company, but in Denver he had trouble finding a job that paid as well. “And I had no idea how I was going to explain this to my family, also, because that’s really not what I was going for.”

He started out trimming cannabis plants and then climbed the company ladder. By all accounts, things were going well. He and his girlfriend married, which meant he traded his student visa for a green card.

As Flo explained it, “when you get your green card via your spouse, they give it to you for two years,” he said.

“Two years later, they want to make sure it wasn’t a scam, that we actually are in love, and married, and living together and I didn’t just give her some money so that I could get my green card.”

When it came time for his review with federal immigration authorities, he asked his employer if he had anything to worry about, and they paid for him to consult an immigration attorney. The news was not good.

“There was just not much they could do for me if I was to get caught, then it would become very complicated for me, and so I made the decision to go back home,” he said over the phone from Ales, a town in the south of France, where he and his wife are house-sitting while he looks for a new job.

He left the U.S. last September, with only two months to uproot his life and move back to another country.

This situation isn’t just a dilemma for immigrants like Flo, but for the marijuana companies that would like to hire them.

The issue came to their attention through a community partnership with Servicios de La Raza, a nonprofit that offers services to low income people. The two groups then banded together to create a PSA explaining all the ways that involvement with marijuana can get non-citizens thrown out of the country.

Even tourists who stop into a dispensary for a joint during a visit to the Mile High City risk running afoul of customs agents who are increasingly searching phones and social media.

Dean Heizer, the executive director of the LivWell chain of dispensaries, has the PSA playing in the lobby of every one of his stores. That’s because he’s dealt with this firsthand.

“In anticipation of potential immigration actions by the government, we have preemptively reached out to folks and advised them of the situation, and invariably, when they’ve been advised, they’ve chosen to quit,” he said.

He’s also tweaked LivWell’s hiring process to include an upfront disclosure that working for the industry could get you deported. He has to take that approach, because Title VII of the Civil Rights Act prevents employers from asking about an applicant’s immigration status.

“We’re trying to address it through public education, because until either the immigration laws get changed, Title VII gets changed or the controlled substances act gets changed, there’s no way out of this,” Heizer said.

The threat of deportation in these situations is not new to the Trump administration. In fact, deportations for drug possession increased 43 percent between 2007 and 2012, according to a report by Human Rights Watch. Violeta Chapin, an immigration attorney and law professor at the University of Colorado Boulder, said those numbers will likely grow. Combine President Trump’s surge in immigration enforcement with a Justice Department hostile to marijuana, and Chapin said the outlook isn’t great.

“This is something that we as a country really need to take a hard look at, which is how are we going to deal with the enforcement that happens around marijuana, still, at the federal level,” she said.

Since that question is not likely to be resolved any time soon, Chapin pointed to one easy way for immigrants to avoid this problem.

“Certainly when people come to me and ask me, and I’m always grateful that they ask me before they make any decision, I tell them don’t get near it. Don’t do it. I’m sorry, you’re just not like everybody else,” she said.

“Like, I could walk into a dispensary tomorrow and buy a joint and go to my house and smoke it. You, unfortunately, that’s a huge risk for you.”

So long as Congress remains deadlocked on immigration, “just say no” seems to be the only option for non-citizens right now. And, while some lawmakers have introduced bills to legalize or otherwise decriminalize marijuana at the federal level, it’s unclear how much of a chance they have of passing.