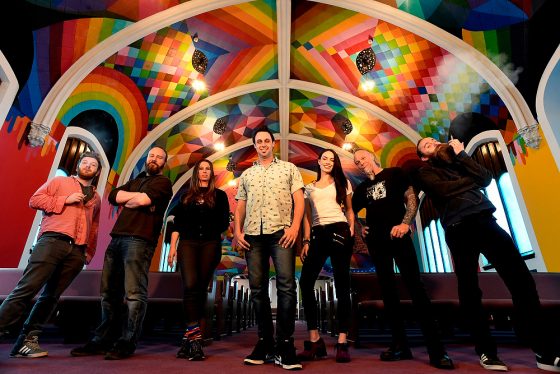 The prosecution of leaders of a Denver cannabis church on charges of open and public consumption of marijuana didn’t make it past jury selection Wednesday.

The three defendants each face a misdemeanor charge of open and public consumption of marijuana and violating the Colorado Clean Indoor Act. They were issued citations following an April 20, 2017 undercover Denver Police sting conducted during their church’s private, invitation-only 4/20 celebration at which many of the 200-plus attendees smoked marijuana in designated consumption areas.

The municipal case is being prosecuted in Denver County Court so city attorneys can argue that the three church leaders were complicit in fostering open and public consumption of marijuana by those attending the event.

Of the 21 people called for the six-person jury, one was dismissed for a medical condition and two were dismissed when they said their stance on marijuana precluded them from upholding the jurors’ oath. Seven of the remaining 18 in the pool were challenged for cause during the two-hour selection process that saw four potential jurors openly questioned Senior Assistant City Attorney Rebekah Watada’s theory of the case.

With the larger county court juror pool having been released for the day, and with neither side willing to relinquish their three preemptory challenges allowing each legal team to dismiss jurors deemed unacceptable, just five possible jurors remained and a mistrial was declared.

“I’ve never seen that,” the defendants’ attorney Warren C. Edson said of the array of people that questioned the prosecution’s legal theory during jury selection. “Hopefully this is a wake-up call for the city that this (case) isn’t the open-and-shut matter that they think that it is.”

One member of the jury pool questioned why seven police detectives were on the prosecution’s witness list for a misdemeanor marijuana case.

Another said he didn’t think tax dollars should be spent prosecuting such cases.

Still another perspective juror said she struggled to understand why the city was pursing the complicity argument when she had witnessed Denver police officers ignore open and public consumption of marijuana in city venues.

“Have you ever been to Red Rocks?” she asked Watada.

Following the declaration of a mistrial, the defendants waived their right to a speedy trial, and a new date was set for July 11.

Watada asked the judge to request a 50-person pool from which to select the six-member jury for the next go-around. She declined to comment about the ongoing case.

To date, there have been at least six hearings on the case, Edson said.

Though each of the three defendants faces two misdemeanor charges, the case could set an important precedent for Colorado’s cannabis laws, Edson said.

Amendment 64, the voter-approved constitutional measure that legalized marijuana in 2012, states that personal marijuana use is allowed by adults 21 and older except when “conducted openly and publicly or in a manner that endangers others.”

As the state approaches five years of legal recreational marijuana sales, open and public consumption has yet to be defined by the state’s Task Force on the Implementation of Amendment 64, the Legislature or in the courts.

While a conviction in the municipal case imposes a maximum penalty of just $300, Edson said a it could have dire consequences for his clients and their nascent church.

Public consumption is a nuisance crime in Denver, he said, so a conviction allows the city to file forfeiture papers on the church property.

“I think that’s where this is heading,” he said when asked why the city was pursuing the case with such zeal.

Outside the courtroom, Berke said that the undercover police sting, charges brought against him and his cohorts and ongoing prosecution constitute religious persecution. He also vowed to mobilize the church’s 2,000-plus Denver metro-area members to hold local politicians accountable for police resources and tax dollars being used for marijuana prosecutions.

“This entire circus is a travesty,” he said.

Inside The International Church of Cannabis

DENVER, CO – APRIL 11: This is a photo of the interior of the International Church of Cannabis at 400 south Logan street on April 11, 2017 in Denver, Colorado. The interior painting was done by artist Okuda San Miguel. The members of this new church call themselves Elevationists and say that the use of cannabis helps elevate people to a higher form of themselves. They plan to open their doors to the public on April 20th and have a weekend of events planned for the neighborhood to introduce people to this new and unique concept for a church. (Photo by Helen H. Richardson/The Denver Post)