With over 350,000 signatures gathered and their debt paid, on Monday, Nov. 20, Michigan moves one step closer to legalizing marijuana.

Advocates of Michigan’s effort to legalize recreational marijuana have announced they’ve cleared their first major hurdle; they’ve paid their bill and are prepared to turn in the necessary signatures to place their initiative of the 2018 ballot.

Supported by the Coalition to Regulate Marijuana like Alcohol (CRMLA), Michigan’s effort to reform their marijuana laws has now been joined by the National Cannabis Industry Association (NCIA).

Announced on Thursday, the timing of this critical collaboration couldn’t be better.

Held hostage for a $30,000 debt owed to the National Petition Management of Brighton, the company that gathered the required signatures would not release them until their outstanding invoice was paid in full.

Receiving some well-timed assistance, CRMLA announced via their website on Nov. 15, the National Cannabis Industry Association would step up and help “the country’s second-largest medical marijuana market” legalize adult-use marijuana.

A national trade association that represents the interests of legitimate and responsible stakeholders in the marijuana industry, NCIA’s assistance was appreciated by the coalition’s spokesperson, Josh Hovey.

Hovey informed the Detroit News on Thursday, “We’ve been getting online donations and others, but them [NCIA] stepping up has really pushed us over the edge.”

The ballot committee has now paid their debt and is prepared to submit more than 350,000 signatures supporting adult-use marijuana on Monday, Nov. 20.

Provided the legislators have no objection to the existing verbiage, the initiative will be placed on the November ballot to be judged by Michigan’s voters on Tuesday, Nov. 6, 2018. 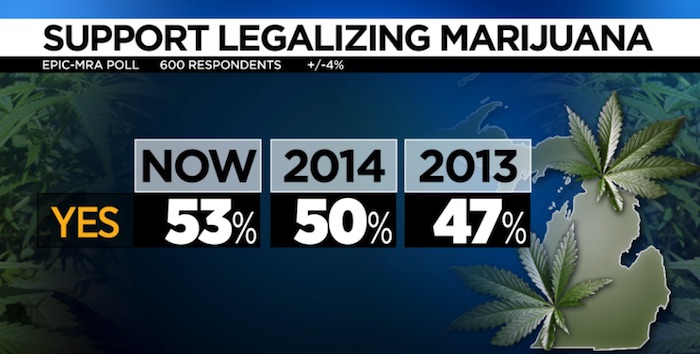 And if the recent polls are correct, residents of the Wolverine State could awake Wednesday, Nov. 7, 2018, in a state that has legalized adult-use marijuana.