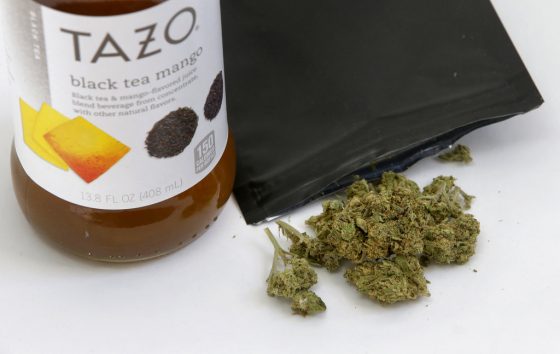 By Philip Marcelo, The Associated Press

BOSTON — The single bottle of juice delivered to your door will set you back at least $55. But the bag of marijuana that comes with it? On the house.

Retail marijuana stores are months away from opening in Massachusetts, but some companies have been quietly operating for more than a year, selling and delivering marijuana via a legal loophole.

Companies like HighSpeed, which describes itself as a juice delivery service, are exploiting so-called “gifting” provisions that are on the books in Massachusetts and most other states where marijuana has been legalized.

They generally allow the exchange of small amounts of the drug so long as it’s given away — “gifted” — from one adult to another. In other words, passing a joint at a party or dropping a bud in your brother’s Christmas stocking won’t result in fines or jail time.

But some entrepreneurs see the provisions as an opportunity to get ahead of the regulated market, planting an early stake in what could become a crowded and lucrative industry.

Gifting also allows cannabis capitalists to undercut licensed shops because they don’t face the same oversight or pay marijuana sales taxes. And underground sellers could complicate things in places like Vermont, Maine and Washington, D.C., which have legalized pot but have no firm plans to open regulated retailers.

“Under any fair reading of the law, these businesses are illegal,” said Roger Katz, a Republican state senator in Maine who is studying the issue. “If it walks like a duck, quacks like a duck, it is a duck.”

At least four enterprises have done gifting business in Massachusetts since marijuana was legalized in December 2016, two of them in the Boston area, The Associated Press found in an investigation that included records gathered from law enforcement agencies around the state.

In addition to HighSpeed, a Boston-area company cleverly called Duuber has drivers delivering marijuana-themed T-shirts that come with gifts of pot.

Officials in western Massachusetts also looked into a Craigslist ad offering plastic sandwich bags costing up to $325 apiece (the marijuana in them was free) but dropped the case after they couldn’t identify the seller.

In Springfield, officials ordered a smoke shop called Mary Jane Makes Your Heart Sing to shut down last March after it gave marijuana to customers who paid a $25 to $50 admission fee.

That hasn’t scared HighSpeed, which also operates in D.C.

“We’ve had no issues with law enforcement, and we’re going to do our best to keep it that way,” said founder David Umeh. “We’re not doing anything wrong. We’re abiding by the current legislation until it changes.”

Gifting provisions are on the books in Massachusetts and all but one of the other states that have legalized marijuana: Alaska, California, Colorado, Maine, Nevada, Oregon and Washington state, plus D.C. Most instituted the measure specifically as part of new marijuana laws.

Vermont does not have a provision, but local experts and activists argue the exchanges will be permitted there, too, since they’re not expressly banned.

Some states have tried to stem abuse of the laws by prohibiting businesses from advertising marijuana giveaways or specifically banning “delayed or disguised” payments for marijuana gifts, said Leo Beletsky, a law professor at Northeastern University in Boston.

But businesses simply find ways to obscure what they’re doing, he said, and then rely largely on word of mouth to make sales. Clued-in customers can infer how much pot they’re ordering judging by the price and size of the items accompanying it, but for the most part, they’re at the mercy of the seller.

In the case of HighSpeed, there is no mention of marijuana on its website. The company sells drinks priced from $55 to $150, depending on whether the beverage comes with “Love” or “Lots of Love.”

The AP recently put in a $60 order for “Raspberry Roxbury” with “Love” and received a bottle of Tazo juice along with about an eighth of an ounce of marijuana.

Duuber also doesn’t explicitly spell out its marijuana “gift” on its website. But when the AP ordered a $100 product listed as “Luxury Tshirt – Citrus – small,” the brown paper bag delivered by a driver contained a white T-shirt with the company’s name in black over an image of a marijuana leaf — and a clear plastic bag of marijuana labeled “1/4 Ruthless OG.”

“People want quality control-tested products,” he said. “The sooner that happens, the sooner this sort of thing disappears.”

“If the feds somehow came down on state regulators or licensed retail operations,” he said, “that could provide a convenient opening for these gray-market operators to scale up what they’re already doing.”

Follow Philip Marcelo at twitter.com/philmarcelo. His work can be found at https://www.apnews.com/search/philip_marcelo.