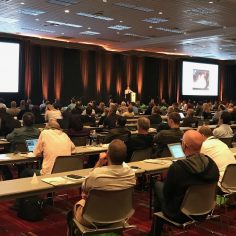 An industry record-breaking crowd of 17,000 is expected to attend the three-day MJBizCon that kicked off Wednesday morning in Las Vegas.

The conference, now in its sixth year, features 112 speakers and 678 exhibitors packed into over 300,000 square feet of floor space at the Las Vegas Convention Center.

Put on by Marijuana Business Daily‘s parent company, MJBizCon is expecting a major uptick in attendance over 2016, which drew over 10,000 industry executives from around the globe.

Attendees are expected from all 50 states, as well as from 44 countries outside the United States, including such far-flung destinations as Kuwait, Hong Kong and Sri Lanka.

“MJBizCon’s new home at the Las Vegas Convention Center provides a terrific backdrop for the industry to showcase how much it has developed in the past year, and over the past five years since the event launched,” said Cassandra Farrington, CEO of Marijuana Business Daily.

“We are thrilled to have the room available at last to welcome the entire cannabis business community in one space.”

In addition to vendors and networking opportunities, MJBizCon is offering keynote addresses from:

The show also features panels of experts discussing ranging from cultivation to business insights regarding one of the newest and hottest cannabis markets in the world, Canada, which is poised to legalize recreational cannabis at the national level next year.

The conference is taking place in Nevada just months after the state launched a recreational industry and only six weeks before California begins regulating adult-use and medical marijuana markets – further reminders of how quickly the cannabis trade at large is growing.