Smarting from Sessions’ opposition to state-legal marijuana in places like California, Colorado and Washington state, the new guidelines sent chills through some in the cannabis community.

“To not acknowledge the difference between a regulated cannabis business and a heroin kingpin is unfathomable,” said Adam Spiker, executive director of the Southern California Coalition, a cannabis business trade group. “We will stand up against these outdated, draconian policies.”

Tom Angell, founder of the Washington, D.C.-based nonprofit Marijuana Majority, said that legal retailers, producers and growers who traffic in state-approved recreational pot could fall under Sessions’ federal guidelines for capital punishment, which include 60,000 kilograms of marijuana product or $20 million in gross receipts in a year.

Some players in the pot world said the attorney general was just grandstanding for his boss, but others noted that Sessions is the most powerful law enforcement official in the land.

“At any point Sessions could make trouble,” said Aaron Herzberg, a founding partner at the Puzzle Group, a law firm that serves cannabis businesses. “I’m not denying he could come knocking on our doors tomorrow.”

Just on Thursday, Sessions announced a “surge” of 250 Drug Enforcement Administration officers and “dozens more” analysts — ostensibly to tackle the opioid crisis. “And when we do, we will pursue the tough sentences they deserve,” he said at a gathering of law enforcement officials in Tallahassee, Florida.

Experts say instituting death for pot dealing is almost legally impossible, but they also expressed astonishment that the nation’s top law enforcement official has tried to open the door to this mortal pathway, even as he aimed his ire mainly at opioid addiction.

“Regardless of one’s feelings about the death penalty, it’s completely unacceptable to be applied to a consensual crime like providing marijuana,” Angell said.

“Mr. Sessions’ threat has the potential to destroy not only the state-legal cannabis industry, but more importantly, the lives of ordinary, law-abiding people,” said Michael S. Hiller, a New York-based attorney who sued Sessions unsuccessfully in a challenge of marijuana’s federal outlaw status. “If the state-legal cannabis industry were to be destroyed, millions of Americans who depend on medical cannabis to live would be unable to treat with their medication.” 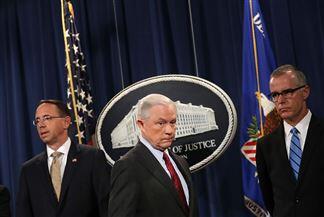 Citing a bill signed by President Bill Clinton in 1994 that allowed capital punishment in “non-homicidal narcotics offenses,” Sessions said in a letter to his troops Monday that “I strongly encourage federal prosecutors to use these statutes, when appropriate, to aid in our continuing fight against drug trafficking and the destruction it causes in our nation.”

The memo came after the president, speaking in New Hampshire Monday, said drug dealers and south-of-the-border narcotics imports were responsible for an opioid epidemic many experts blame on prescription drug abuse. “If we don’t get tough on the drug dealers, we’re wasting our time,” Trump told a crowd of supporters. “That toughness includes the death penalty.”

While the president himself has expressed support for medical marijuana in the past, Sessions has offered no ambiguity on the drug.

The man who said in 2016 that “good people don’t smoke marijuana” in January declared that his prosecutors were free to prosecute cannabis suspects in states that have legalized the drug. At the time he promised them “all the necessary tools to disrupt criminal organizations, tackle the growing drug crisis, and thwart violent crime across our country.”

Even if the Trump administration’s threat is hollow for state-legal cannabis concerns, people in the business — recreational pot is now legal in nine states — could be “frightened away from operating their businesses,” Hiller, the lawyer, said.

“Mr. Sessions, while often the butt of jokes on television shows like ‘Saturday Night Live,’ holds a very powerful position in Washington, D.C., and, by virtue of that position, is capable of causing real societal damage,” he added.

Los Angeles dispensary owner Virgil Grant served time in federal prison after his shop was raided in 2008, before the administration of President Obama ordered prosecutors to back off on enforcement in states where pot had been legalized. He said some legit cannabis businesses in the state could make those weight and revenue thresholds described in Sessions memo, should prosecutors choose to target cannabis operators.

Bonita “Bo” Money, founder of the National Diversity and Inclusion Cannabis Alliance (NDICA), is concerned that the administration’s stance is putting people of color who have been disproportionately prosecuted for drug crimes back in law enforcement’s cross hairs. “The real drug dealers are Big Pharma,” she said. “Now they want to target people of color in the cannabis industry.”

Former narcotics kingpin and ex-con “Freeway” Ricky Ross, who’s a board member of NDICA, said that, because he moved so much cocaine in 1980s, he would have been eligible for Death Row under the current administration. He sees Sessions’ move as a step back when it comes to equal justice for African-Americans. “I think blacks have paid the biggest price when it comes to going to prison for marijuana,” he said.

Some experts, however, including attorneys Hiller and Herzberg, argue that a federal death penalty case against a state-legal pot business operator is unlikely. Hiller noted that court precedent so far precludes capital punishment for drug crimes.

“The U.S. Supreme Court has repeatedly ruled that under circumstances in which no homicide was intended the death penalty is not permissible,” he said.

“It would make it difficult for prosecutors to know the difference” between medical and recreational pot businesses and thus provide some cover, Kiloh said.

The U.S. Attorney’s Office in Los Angeles and the California Bureau of Cannabis Control did not return calls for comment.