It’s not surprising that artist Izaac Zevalking, who succinctly drills down complex societal issues into a solitary image could also, in a single sentence, tackle the meaning of life. “Like life, you are envisioning the endpoint but it’s the journey that is the significant thing,” he notes, adding, “Art really embodies that. We acknowledge that there isn’t any endpoint but we still embrace the journey.” 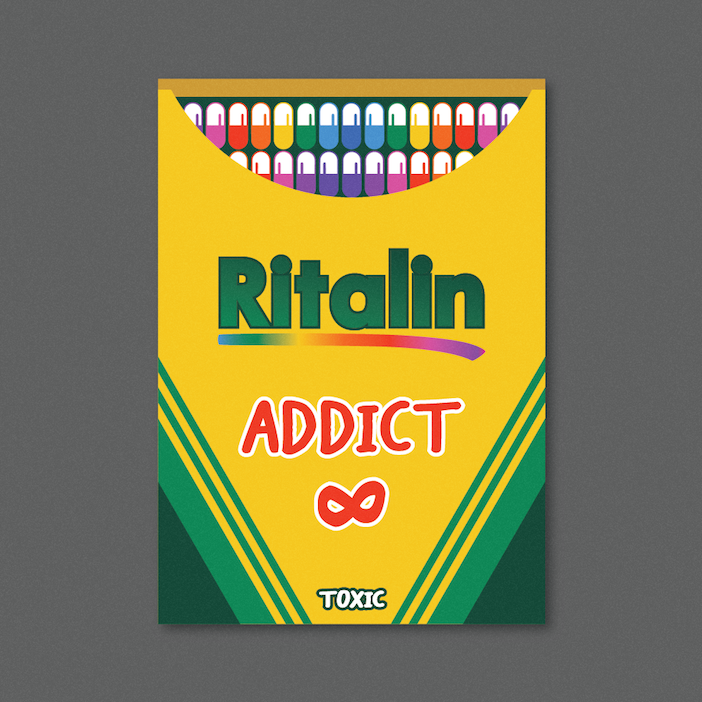 Zevalking, 30, has used his own journey to create a divergent path. A graphics designer, he moved to Las Vegas five years ago from England to be near his sister. His move proved serendipitous in that it led him to start Recycled Propaganda a year after arriving, which he uses as a springboard for confronting and discussing everything from religion to obesity. 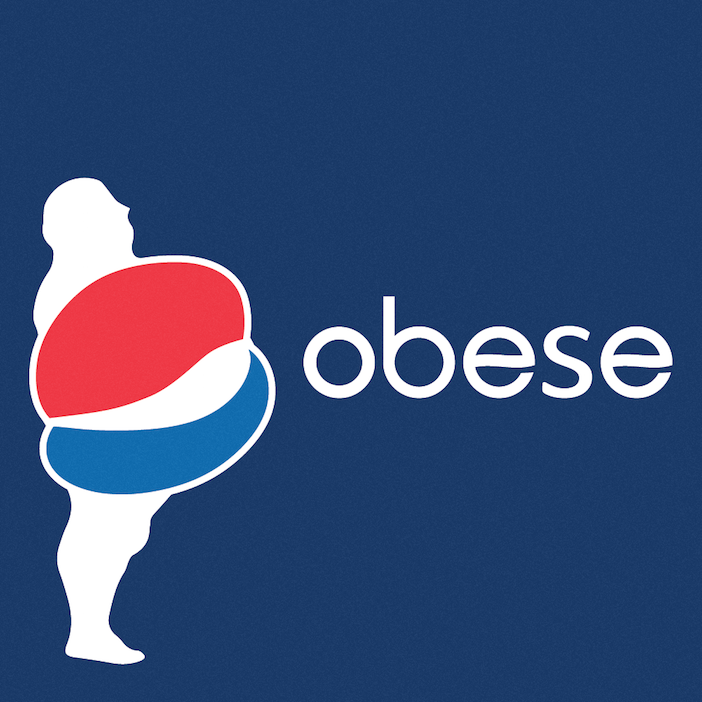 Of Recycled Propaganda’s origins, Zevalking says, “In essence that is what I try and do with all my work, whatever energy there is, feed off the energy of the people around me and recycle it, hence the name, and spit it out as something that is more useful to society.”elevate sat down with Zevalking to talk about his art (which has found its way into several local dispensaries), Trump, cannabis, the illogicality of logic, and acceptance of failure.

I moved here and needed an outlet to say the things I was saying without saying them. I just started making images and branded that as Recycled Propaganda. I never had an intention of being an artist until I moved here. It was the way I would sort of cope with the social differences and injustice being more apparent. When you are removed from where you grew up, whether that be domestically or internationally, you have to adjust. England and America are similar enough that you can relate, not so alien that they don’t sort of overlap. England in a lot of ways does follow in the wake in America, a lot of the world does these days. So, a lot of core issues play out here and are much more polarized and apparent here, like genetically modified food and religion, they are all so much more polarized here than in the UK. Here, you have the really fit and aware people and the not fit and not aware people, and in England it’s more like gray than so black and white.

You drill a complex issue down into a single graphic. What skills do you rely on for that?

The hardest part of what I do is the initial conceptualization of the pieces and there’s no real magic ingredient to it. I just jot down ideas and notions I have and when I am illustrating them I just try different variations and it works or it doesn’t work. The longer you do that sort of thing, the easier it becomes to see what does and doesn’t work visually. So, I rely on a heavy amount of intuition, and I am naturally a creative thinker.

As society becomes increasingly polarized, have you seen interest pique in your work? 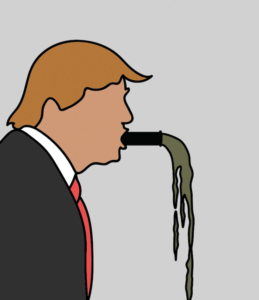 Yes, especially since Trump came into the mix and started running for president. He brings a lot of issues to a point, either by doing something or saying something and not necessarily in a bad way, either. That has definitely animated the left. I am glad I started the art I was doing prior to that because it’s given me a point of reference to be like, ‘Wow, I did this design in 2014,’ and so this issue has always been there. It’s just people are more aware of it because it’s thrust upon them. It’s fascinating to me, but it’s also been inspirational to see that when more liberal, open-minded people are angry they are more drawn toward art. You are just drawn toward something that isn’t further perpetuating the problem. The point of art is there isn’t a singularity to it, you can observe it in many different ways.

The worst thing someone can say about my art is that they see it in a very specific way because it’s undermining what I am trying to achieve, which is you view it like that but someone else could view it in a totally different way. Isn’t that more important than the issue itself? How we respond to the issue? No matter what design I have created, people have pitched to me crazily different notions of what it means. I like that, the ambiguity is what I want, I want people to be able to view it from both sides of the aisle. To be able to still relate to it and still have something to say and reflect on society because of it. I just wish people were aware that phenomenon existed. Like the Trump piece of him spewing sewage, it was about his oil policy, that’s why I did it. But I have had multiple people come by and say, ‘Yeah, Trump is draining the swamp.’ And that’s the beauty of art. 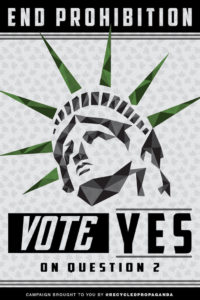 Specifically, with health and wellbeing, I found it quite ironic how unhealthy a lot of America is and how extremely healthy a lot of America is as well, and how hyperaware people are of a lot of health stuff, more so than in England. That surprised me how much that resonated with America because for somebody who didn’t grow up in America, it’s viewed as a highly unconcerned country about health. If you look at health policy, school lunches, obesity levels, cancer rates, it’s bad on paper so you don’t expect there to be that undercurrent here.

The ultimate example of that and saddest example of that is marijuana. You have a substance that is potentially miraculously curing of numerous diseases that has been so propagandized and demonized that people think the opposite of the truth. It’s just a really neat case study, let’s show how we can manipulate thought for a whole generation based on nothing. I think it truly began with schedule I drugs, which are all mind altering. I think the forces that be don’t want you to expand your mind because when you expand your mind enough you see the strings of control being pulled. 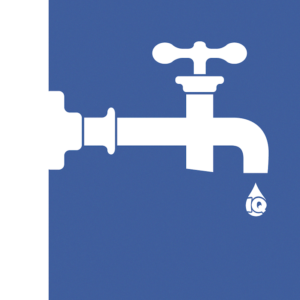 Have there been issues you wanted to tackle that you weren’t able to make succinct enough to work?

Yes, I think almost every time I go to do an image. There’s a lot of ideas and a lot of them don’t work as visuals or I can’t wrap my head around it at that moment so I will just move on. Or I will initially want to do one topic but these images come up and it ends up being about something different. It’s not always tidy and linear. It’s almost as if I just allow myself to be a sponge and absorb information and listen to people make reasoned arguments and talk about stuff that’s going on then I sit down and I am doing stuff creatively and I draw upon those things.

Have you ever failed to convey your message?

Failure is one of the most important parts about being an artist or doing any profession. Recognizing failure is not doing it as well as you wanted to do it, improving, and then doing it better. Without that reflection and critique of your work, I don’t think you can ever really move anywhere as an artist. People find failure very difficult to embrace. I don’t like to use the word failure because there is no such thing, especially in art, it’s just something that one person didn’t like or I didn’t like that you can iterate until you do. The important thing is that you learn from it and that fear doesn’t get involved because once fear gets involved it shuts down options from the universe. You need to just be open to change.

Do you feel like once you have created a piece and sent it on its way you are missing out on the best part of artwork – the conversation surrounding its meaning?

Yes, I think that’s why I like doing events and art festivals because I can overhear or see people and how they react to them and what they think of them. I think that gives me more useful insight into people than anything else. The way somebody interprets a piece of art, you can extrapolate a lot about them. I think it has really aided on my learning of being in this country by seeing reactions to my work. I would love to have a camera in each piece of my art to see what people think.

How important is the idea of art and creativity to society? 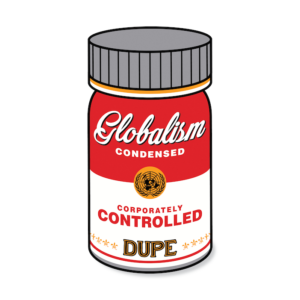 Moving forward as a society, art is probably one of the most important things and it’s still so underappreciated and underfunded and not even seen as a legitimate option. Not even art as in what I do, but creative thought in general is not very promoted that much in society. We are always just using one side of the brain to think in logical terms. That irony has to come to a point that education and everything we learn is so logic based and computers are so good at logic then why are we teaching kids logic? We need to teach them nonlogic or creative thinking. I have done some workshops with kids and kids are great because their creative mind hasn’t been squashed yet. So, generally, they are quite creative thinkers. I think there is a Picasso quote: Everybody is an artist until they are taught not to be. I think that is very true. If we look at America, it’s successful because of innovation which is just creative thought. I think that sooner or later as a society we will recognize that.

This story was originally published in elevate NV magazine