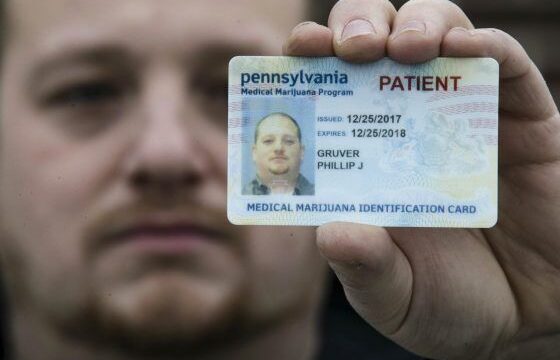 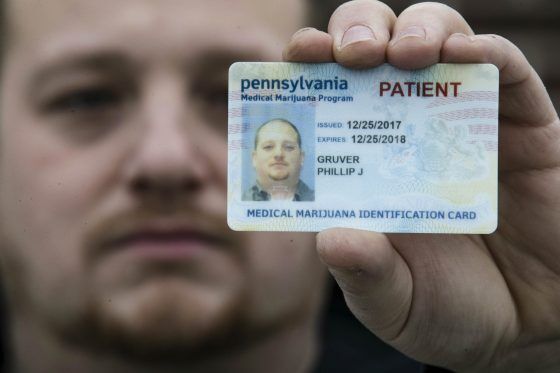 By Mark Scolforo, The Associated Press

HARRISBURG, Pa. — The federal government says grass and guns don’t mix, and that is putting gun owners who use marijuana — and the strongly pro-gun-rights administration of President Donald Trump — in a potentially uncomfortable position.

As gun-loving Pennsylvania becomes the latest state to operate a medical marijuana program, with the first dispensary on track to begin sales next month, authorities are warning patients that federal law bars marijuana users from having guns or ammunition.

“They’re going to have to make a choice,” said John T. Adams, president of the Pennsylvania District Attorneys Association. “They can have their guns or their marijuana, but not both.”

That’s the official line, but the reality of how the policy might be enforced in Pennsylvania and other states is a little muddier. That includes the question of whether people who already own guns might have to surrender them, instead of just being prohibited from making new purchases.

The political sensitivity was underscored Friday when Pennsylvania regulators reversed themselves and announced its registry of medical-pot patients will not be available, as was previously planned, through the state’s law enforcement computer network.

Phil Gruver, a professional auto detailer from Emmaus who received a state medical marijuana card in mid-December, is weighing what to do with his .22-caliber rifle and a handgun he keeps for home defense.

“It’s a violation of my Second Amendment rights,” Gruver said. “I don’t know of any time anyone’s been using marijuana and going out and committing acts of violence with a gun. Most of the time they just sit on their couch and eat pizza.”

State laws allowing medical or, more recently, recreational use of pot have long been at odds with the federal prohibition on gun ownership by those using marijuana. But the government has traditionally taken a hands-off approach. Since 2014, Congress has forbidden the Department of Justice from spending money to prosecute people who grow, sell and use medical pot.

The picture has become murkier under Trump, a Republican whose attorney general, Jeff Sessions, has long denounced the drug. Sessions recently rescinded a Barack Obama-era policy that was deferential to states’ permissive marijuana laws. Now, federal prosecutors in states that allow drug sales must decide whether to crack down on the marijuana trade.

It’s not clear what impact the new policy will have on gun owners who use cannabis as medicine, or even how many people fit the bill. Nor is it clear whether any people who use legally obtained medical marijuana have been prosecuted for owning a gun, although the existence of medical marijuana registries in some states, including Pennsylvania, has some patients concerned.

More than 800,000 guns are sold or transferred in Pennsylvania annually, and more than 10,000 people in the state have signed up for medical marijuana. The registry change on Friday makes it much less likely the state’s medical marijuana users will be flagged when going through a federal gun sales background check.

A spokeswoman for Dave Freed, the new U.S. attorney in Harrisburg, said only that criminal investigations and prosecutions “will be based on a fair and transparent fact-intensive inquiry of individual cases.” State police said it’s up to prosecutors to decide when to bring a case.

The Justice Department’s Bureau of Alcohol, Tobacco, Firearms and Explosives has left no doubt where it stands. Last year, the ATF spelled out the marijuana prohibition in boldface type on gun purchase forms.

“Any person who uses or is addicted to marijuana, regardless of whether his or her state has passed legislation authorizing marijuana use for medical purposes … is prohibited by federal law from possessing firearms or ammunition,” ATF spokeswoman Janice L. Kemp said in an email to The Associated Press.

A spokeswoman for the Justice Department referred questions about medical marijuana and guns enforcement to local federal prosecutors and a recent memo from Sessions that does not specifically address the issue.

In Ohio, which has authorized a medical marijuana program, the office of the U.S. attorney for the northern part of the state, Justin Herdman, has said Sessions’ guidance won’t change his case-by-case approach.

The gun-ownership ban has withstood at least one legal challenge. An appeals court in San Francisco, rejecting a challenge on Second Amendment grounds, said in 2016 that Congress reasonably concluded marijuana and other drugs raise the risk of unpredictable behavior.

Meanwhile, some state and local officials, particularly in law enforcement, have sought to crack down.

William Bryson, chairman of the Delaware Police Chiefs’ Council, told state lawmakers in December that people who use marijuana for medical or recreational purposes should be required to have a designation on their driver’s licenses. That would make it easier, he said, for police to enforce the ban.

And last month, a police chief in Hawaii publicized and then quickly rescinded a directive that medical marijuana patients had to give up their handguns. Two people turned in their weapons.
But marijuana activists predict a backlash should federal prosecutors begin going after gun owners who use legally obtained medical marijuana.

The issue has been largely theoretical, but there would be quick pushback if the federal government took a more aggressive stance, said Paul Armentano, deputy director of the National Organization for the Reform of Marijuana Laws.

Between 1998 and 2014, nearly 100,000 prospective gun purchasers went home empty-handed because they were flagged as using illegal drugs, according to the ATF. But the agency could not say how many of those used medical or recreational marijuana.

Dean Hazen, an Urbana, Illinois, businessman who helps broker online gun purchases, said a 75-year-old client with a medical marijuana card was turned down when his state firearm-owner identification card was run through the federal background check system.

“He’s got a collection of guns at home,” Hazen said, “and he’s a model citizen.”

Even before his administration took the medical marijuana registry off the Pennsylvania law-enforcement computer network, Gov. Tom Wolf, a Democrat, sought to assure people the state has no plans to take their guns. And last week, state House Republican Leader Dave Reed urged residents to call their congressional representative and “urge them to make gun ownership legal for medical marijuana card holders.”

Kim Stolfer, head of the Pennsylvania organization Firearms Owners Against Crime, pointed out that people who drink heavily or use potent but legal drugs such as opioids or antidepressants can still own a gun.

“You have people that are advancing up in age that need medical marijuana and might have, say, 50 firearms and just realized they sacrificed all of those,” Stolfer said. “Where are they going to turn them in and how are they going to get rid of them?”

Contributing to this report were Associated Press writers Andrew Welsh-Huggins in Columbus, Ohio; Don Babwin in Chicago; and Randall Chase in Dover, Delaware.