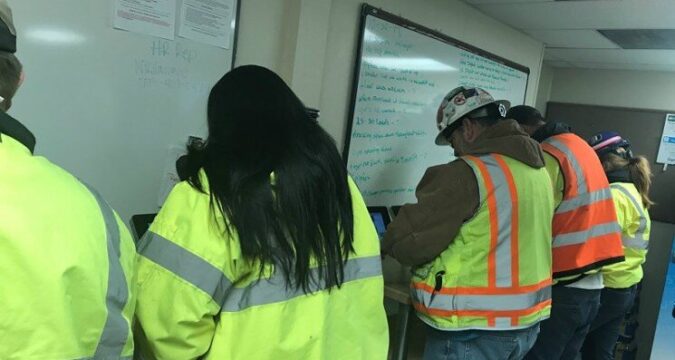 Today, February 21, as we’ve reported, Denver’s National Organization for the Reform of Marijuana Laws branch is taking part in a lobbying day at the Colorado State Capitol during which lawmakers will get the chance to learn about a major element in the group’s attempt to fix drug-testing laws that put cannabis users at risk of being fired for lawful use.

Specifically, they’ll be able to try out Alert Meter, which tests for impairment rather than relying on blood or fluid draws that Denver NORML sees as undependable and unfair.

“Cognitive-impairment testing or fit-for-work testing is the solution,” says Carol Setters, vice president of business development for Predictive Safety, Alert Meter’s parent company, “because it tests the brain, not the body fluids — and that’s what you want. If you want to test someone’s performance, that’s what you should be looking at.”

Last week, Denver NORML executive director Jordan Person shared with us new statutory language intended to prevent businesses from, in her words, “firing people on Wednesday for performing a lawful activity on Saturday.”

That’s what happened to Brandon Coats, whose story we’ve been covering since 2012. A paralyzed medical marijuana patient, Coats was fired by DISH for failing a drug test two years earlier even though he was never accused of having been stoned on the job and consistently received exemplary work reports. But a series of judges, including those on the Colorado Supreme Court, ruled in DISH’s favor because marijuana remains illegal under federal law. 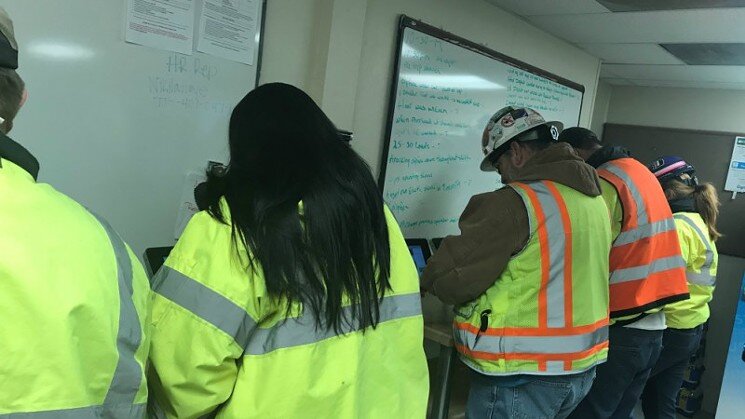 A construction crew performs the Alert Meter test before heading to the job site.

She added that the text would also amend the Discriminatory or Unfair Employment Practices act’s references to “a positive drug test for metabolites of marijuana — because that’s what they’re testing for when someone has a drug test for cannabis. And that science is so antiquated.”

Indeed, advocates have noted for years that traces of marijuana linger in the system of users for significant periods of time and can result in positive drug tests even for sober individuals.

Back in 2011, Westword cannabis writer William Breathes tested nearly three times over a .5 nanogram standard being floated for driving impairment even though he’d last consumed cannabis fifteen hours earlier, prior to a full night’s sleep.

Not that Denver NORML is arguing in favor of on-the-job marijuana use being allowed. Instead, the proposal prohibits firing or penalizing a worker unless he or she “used, possessed or was impaired by marijuana during the hours of employment,” with impairment to be determined by Alert Meter rather than what Person calls “the old urine-dipstick method.”

How does Alert Meter work? The following video offers a primer — but here’s how Setters explains it.

“The test is taken every day before work, and it can be taken on any screen,” she notes. “You can take it on a cell phone using an app or you can take it on a computer or a fixed-screen tablet near the entrance — whatever kind of device you have to use.

Each person then looks at a series of shapes that are presented in a timed setting. The shapes are based on a lot of data analysis in terms of their difficulty for people to comprehend whether or not they’re the same as the shape next to them.”

Completing the test “takes sixty to ninety seconds,” Setters estimates, “and the system determines if the person is behaving the same way as they normally do when they select this family of shapes; it takes about ten sessions to establish a baseline. If the test is within their normal range, that’s it; they’re done.

But if it’s outside the normal range, the person will be told to please take the test again — and oftentimes that’s all it takes for someone to say to themselves, ‘Okay, I’ve got to focus.’ But if they’re truly impaired, they’ll fail the test a second time, which is very unusual. And at that point, the system will automatically inform a designated supervisor, who will then talk to the employee about what needs to happen to keep everyone safe.”

Alert Meter doesn’t only flag people under the influence of drugs. It will also identify those who aren’t at their best because of not enough sleep, for instance. Setters recalls another time when “I had a company tell me about an employee who’d had a personal tragedy over the weekend. He came in on Monday determined to work, but he couldn’t pass his test because he was still so emotionally distressed — and we’ve all been there.

When you get some really bad news and can’t concentrate, that’s a safety risk just as much as being high, which is why this turns the whole idea of drug testing on its head. It gives us a chance to elevate the conversation and say, ‘Let’s care about our employees instead of policing them.'”

The technology being used by Alert Meter isn’t new, Setters points out, and it actually has a federal pedigree.

“The system is built on something that was created in part with a grant from NIOSH — the National Institute for Occupational Safety and Health,” she says. “And the impairment tests are based on science that started with the National Institute of Health and NASA back in the 1960s, when they were trying to figure out if astronauts would have some kind of cognitive impairment if they spent long periods up in space by themselves.”

In the beginning, Setters goes on, the impairment testing apparatus “was really clunky and took a long time to do and couldn’t be adapted to a workplace setting. It tried to re-emerge in the 1990s, which is really when drug testing as we know it today — testing body fluids — got its foothold.

But around 2005, when touch-screen technology came into play, impairment testing really came into its own. We’ve been doing this for seven or eight years, mostly as part of a larger fatigue-management system in industries such as mining and transportation. But there are also applications when it comes to drug testing, especially with so many states legalizing marijuana.”

The issue is coming to a head in plenty of places, Setters allows. “I heard about a union in the Bay Area where one of the advisers said, ‘You need to stop testing your construction workers for cannabis use, because if you do, you’re going to lose all your employees.'”

Besides, Setters continues, “the truth is, there’s not set level of THC in the human body that indicates impairment. There’s no standard. I myself did testing with people who’d already established a baseline on Alert Meter. We brought them all in, had them all smoke the same exact joint with the same level of THC and then tested them every ten minutes for the next two hours, and the results were all over the place. Some were fine, some were terrible; it just depended on the person.

That’s why so many states are having so much trouble setting an impairment level — because there’s no way to know. But Alert Meter shows you when each individual person actually is impaired.”

Setters is excited to show off the system at the State Capitol. “We think it’s a great opportunity for senators to try it out,” she says. “We’re very agnostic about marijuana use. We have no dog in that fight. But we think we can help improve safety and employee relations — and do it for all the right reasons.”