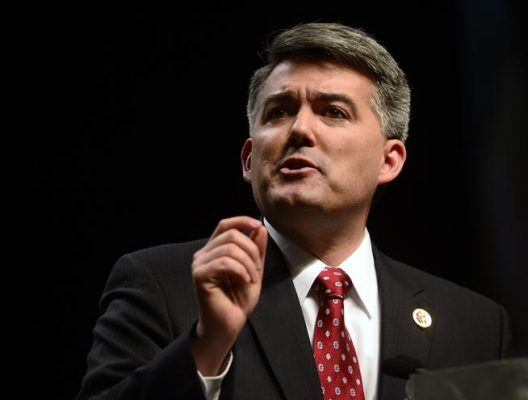 Colorado politicians on both sides of the aisle resoundingly lambasted U.S. Attorney General Jeff Sessions’ decision Thursday to end an Obama-era policy that allowed for marijuana legalization to spread in U.S. states despite pot being federally unlawful.

They said the change put Colorado’s pot marketplace at serious risk — though it still was unclear what the impact would be in the nation’s first legal recreational market.

The decision “has trampled on the will of the voters,” tweeted U.S. Sen. Cory Gardner, a Republican.

“This industry has been implemented, the sky has not fallen like many of us thought it would and it’s being done responsibly across the country,” said Denver Mayor Michael Hancock, a Democrat, calling the decision a disappointment in an interview.

In a fiery Senate floor speech, Gardner also said Sessions’ move could put thousands of jobs and millions of dollars in revenue at risk, calling it a trampling of Colorado’s rights.

Gardner threatened Thursday to withhold support for Justice Department nominees until the policy dispute was resolved.

“Before I voted to confirm Attorney General Sessions, he assured me that marijuana would not be a priority for this administration,” Gardner said in a statement. “Today’s action directly contradicts what I was told, and I am prepared to take all steps necessary, including holding (U.S. Department of Justice) nominees, until the attorney general lives up to the commitment he made to me prior to his confirmation.

“In 2016, President Trump said marijuana legalization should be left up to the states and I agree.”

The rallying cries against Sessions’ reported rescinding of the so-called Cole Memo were joined by Gov. John Hickenlooper, a fellow Democrat, as well as Republican U.S. Rep. Mike Coffman, who questioned if the nation’s top law enforcement officer understood the Constitution. All of those officials had opposed the legalization of recreational marijuana before 55 percent of Colorado voters approved it in 2012.

Coffman, in his statement, said: “Attorney General Sessions needs to read the Commerce Clause found in Article 1, Section 8 , Clause 3 of the U.S. Constitution that limits the power of the federal government to regulate interstate and not intrastate commerce.”

Sessions’ decision to undo the Obama-era Cole Memo allows federal prosecutors, in states where marijuana is legal, to decide how and when to enforce the federal ban on marijuana. The Cole Memo had set several guidelines for federal prosecutors to use in assessing marijuana laws, including whether reasonable efforts were being made to keep pot out of children’s hands.

“It is the mission of the Department of Justice to enforce the laws of the United States, and the previous issuance of guidance undermines the rule of law,” Sessions said in a statement announcing his memorandum. “Therefore, today’s memo on federal marijuana enforcement simply directs all U.S. Attorneys to use previously established prosecutorial principles that provide them all the necessary tools to disrupt criminal organizations, tackle the growing drug crisis, and thwart violent crime across our country.”

Related:“This is outrageous”: Politicians react to news that A.G. Sessions is rescinding the Cole Memo

The move by President Donald Trump’s attorney general likely will add to confusion about whether it’s OK to grow, buy or use marijuana in states where cannabis is legal, since longstanding federal law prohibits it. It also bolsters the anxiety surrounding the state of legal marijuana under Trump, effectively putting legal pot at risk.

“The Cole memo got it right and was foundational in guiding states’ efforts to regulate the production and distribution of marijuana,” Hickenlooper said in a statement. “Colorado has created a comprehensive regulatory system committed to supporting the will of our voters. … We are expanding efforts to eliminate the black market and keep marijuana out of the hands of minors and criminals. Today’s decision does not alter the strength of our resolve in those areas, nor does it change my constitutional responsibilities.”

Sessions’ decision comes as states across the country have legalized marijuana in different forms and days after pot shops opened in California, launching what is expected to become the world’s largest market for legal recreational marijuana. Polls also show a solid majority of Americans believe the drug should be legal.

The Cole Memo, sent to federal prosecutors in 2013, essentially said the Obama administration would not interfere with states that had legalized marijuana as long as local officials worked to keep weed from crossing state lines. The memo also directed states to ensure that legal pot did not fall into the hands of children or criminal organizations.

But under Sessions’ new guidance, that has all been tossed out the window.

Trump has yet to nominate a U.S. attorney for Colorado, which has left an Obama-era holdover — Bob Troyer — in the role in the interim.

Trump told Denver television station 9News during the 2016 presidential campaign that he wouldn’t use federal authority to shut down recreational marijuana sales in states like Colorado.

Had to ask @realDonaldTrump about #marijuana in light of his alliance with @GovChristie:#9NEWS #COpolitics pic.twitter.com/lK4btIQWuK

Sessions, however, has been a vehement critic of marijuana.

In his new, one-page policy rescinding the Cole Memo and sent to the nation’s U.S. attorneys, Sessions said “in deciding which marijuana activities to prosecute … with the Department’s finite resources, prosecutors should follow the well-established principles that govern all federal prosecutions.” That includes weighing the seriousness of crimes and community impact.

It wasn’t immediately clear how Sessions’ decision to rescind the Cole Memo would directly impact legal marijuana in Colorado, or to what extent. Troyer, the state’s interim U.S. attorney, indicated in a statement released Thursday that said his office wasn’t likely to make any big changes to how it views and prosecutes cases linked to pot.

“Today the attorney general rescinded the Cole Memo on marijuana prosecutions, and directed that federal marijuana prosecution decisions be governed by the same principles that have long governed all of our prosecution decisions,” Troyer said. “The United States Attorney’s Office in Colorado has already been guided by these principles in marijuana prosecutions — focusing in particular on identifying and prosecuting those who create the greatest safety threats to our communities around the state.  We will, consistent with the attorney general’s latest guidance, continue to take this approach in all of our work with our law enforcement partners throughout Colorado.”

Colorado Democrats were swift to attack Sessions, from Hancock to Pueblo County Commissioner Sal Pace and members of Congress.

“In rescinding the Cole memo, the Attorney General failed to listen to Colorado, and will create unnecessary chaos and confusion,” U.S. Sen. Michael Bennet, D-Colo., said on Twitter.

“It is absurd that Attorney General Sessions has broken Trump’s campaign promise and is now waging war on legal marijuana and states’ rights,” U.S. Rep. Jared Polis said in a statement. “The growing Colorado economy is in jeopardy with the news that the Attorney General will now go after states that have decided to regulate marijuana. The Trump Administration needs to back off.”

In rescinding the Cole memo, the Attorney General failed to listen to Colorado, and will create unnecessary chaos and confusion. https://t.co/vSQuhlkv4D

Unconscionable. This is why I have repeatedly sponsored legislation to prevent this type of federal overreach; it undermines the rights of Coloradans and hurts an important industry. https://t.co/FwWn0rIPTy

.@realDonaldTrump pls stop your loser Attorney General from making you look weak and undermining you by putting big swamp government in the way of our state marijuana laws

Denver residents voted overwhelmingly for this and we’ve become an international model for how to do it right. Another example that this admin doesn’t listen, doesn’t pay attention, doesn’t get it. https://t.co/YbCgRktvVt @cannabist @CoryGardner @SenBennetCO @RepDianaDeGette