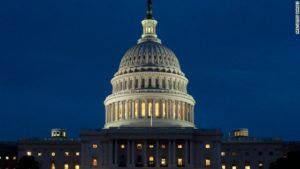 But massive spending bill will continue to protect medical marijuana use

WASHINGTON — A $1.3 trillion plan to fund the federal government through the end of September won’t include protections for the recreational marijuana industry — a blow to Colorado lawmakers who tried to add that language to the must-pass bill.

The legislators wanted the measure to include a provision that would prohibit the U.S. Department of Justice from spending money to crack down on recreational use in states that had legalized the drug.

Congress has protected medical marijuana this way for the past several years — and did so again in the 2,232-page spending bill — but several Colorado lawmakers wanted to broaden that shield after U.S. Attorney General Jeff Sessions in January rescinded an Obama-era policy that generally left alone states such as Colorado that had legalized marijuana.

U.S. Sens. Michael Bennet and Cory Gardner of Colorado were among 18 senators who wrote to the Senate Committee on Appropriations in February with the request that its members “respect states’ laws regarding the regulation of marijuana.” [Read more @The Denver Post]

Rob Meagher, CBE’s Founder, President and Editor-in-Chief is a 30 year veteran of the media world. His career has spanned from stints representing the Washington Post, USA Weekend, Reader’s Digest, Financial World & Corporate Finance to the technology world where he worked at International Data Group, Ziff Davis before starting his own Marketing and Publisher’s Representative Firm. He also ran all print and online media sales and marketing for the Society for Human Resource Management before partnering with Forbes and then Fortune to create Special Sections covering a variety of topics. Rob enjoys golf in his spare time with his wife Lyn and has two sons that occasionally help-out at CBE Press.