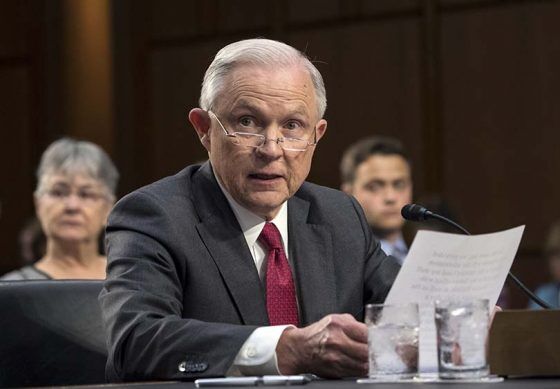 Democratic representatives Jared Polis, Diana DeGette and Ed Perlmutter, and Republican Rep. Mike Coffman signed the letter to Sessions. In it, they “strongly urge” the Department of Justice to reinstate the Cole Memo in order to ensure the Justice Department “is acting to uphold the will of Colorado voters and the rights of the states to regulate intrastate commerce.”

“We represent a state that posed the question of marijuana legalization to its voters not once, but twice,” they wrote. “Voters first approved the use of medical marijuana and subsequently, our constituents approved its use for adult recreational use. The citizens of Colorado have spoken on this issue. We believe we are obliged to heed their decision. Further, all the laws and regulations put in place governing the use of marijuana in our state clearly restrict it to a matter internal to the state of Colorado.”

Sessions on Jan. 4 issued a memo announcing that he was rescinding the Cole Memo and related guidance issued during the Obama Administration to provide guidelines for prosecutors, financial institutions and law enforcement agencies handling marijuana-related issues.

The guidance represented the government taking a hands-off position from states that legalized and regulated marijuana in some form, prioritizing aspects such as keeping marijuana out of the hands of children, preventing drugged driving and preventing its distribution out of state or to criminal enterprises.

The representatives, in their letter Tuesday, said that Sessions’ move stands at odds with President Donald Trump’s publicly stated position about marijuana. They added that marijuana regulation should be a states’ right concern.

Related: Federal marijuana bills boosted by new supporters as Congress gets back to work

On Tuesday afternoon, Gardner tweeted that he hosted a meeting between bipartisan group of senators to discuss the Cole Memo repeal.

I just finished hosting a bipartisan group of Senators on the Justice Department’s decision to repeal the Cole memo. We discussed a path forward to respect the will of the people & defend states’ rights.

“We discussed a path forward to respect the will of the people and defend states’ rights,” Gardner tweeted.

Gardner plans to meet with Sessions on Wednesday, Gardner’s spokesman told The Cannabist.

“This disagreement is about states’ rights, and he will be asking the attorney general for work with him to ensure Colorado rights are protected,” Casey Contres, Gardner’s press secretary, said via email.

This story is developing and being updated.

Read the letter from the representatives: