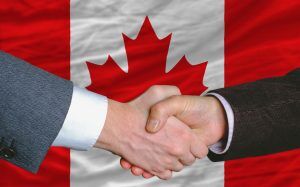 Two Canadian producers of medical marijuana have finalized what is believed to be Canada’s largest cannabis supply deal, a transaction that essentially secures a long-term agreement and mitigates future risks.

The product will be grown in Sunniva’s planned British Columbia facility, on which Sunniva expects to break ground in March or April.

Sunniva CEO Tony Holler told Marijuana Business Daily that he expects the majority of the 100 million Canadian dollar ($80 million) building to be financed by loans from tier-one financial institutions, which would make Sunniva the first cannabis company in Canada to access debt at that scale.

“Our focus is on the medical market, but we have to derisk our (recreational) business,” Holler said.

“We’ll be producing a lot of cannabis and we want to presell the majority of it and gradually build our own business.”

Holler said he believes the deal with Canopy is the largest cannabis transaction “by far.”

The next closest would be Hydropothecary’s letter of intent to supply the Quebec market with 20,000 kilograms of cannabis for Canada’s first year of legalization.

Sunniva and Canopy will share revenue from sales through Canopy’s distribution network, including its online marketplace and via provincial distribution channels.

Company executives said the arrangement goes beyond a standard off-take agreement to more of a “partnership,” given that they will be sharing strain production and retail revenues.