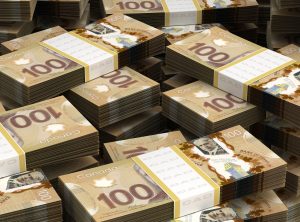 Canopy Growth became the first marijuana company in Canada to enlist a major Canadian bank to lead an equity-based funding, signaling a greater willingness by big financial institutions to provide financing to the nation’s cannabis businesses.

Under the bought-deal transaction, a syndicate of underwriters has agreed to purchase 5.06 million Canopy shares at a price of CA$34.60 per share. The underwriters have the option to buy an additional 759,000 shares for another CA$2.6 million.

Capital is pouring into the Canadian marijuana sector faster than ever, as companies bankroll capacity to meet demand ahead of the anticipated legalization of adult-use marijuana this summer.

Through the first 10 days of 2018, marijuana companies closed on a variety of funding deals or announced financing plans worth almost CA$1 billion.

Canada’s biggest banks had been steering clear of the marijuana industry to avoid jeopardizing their operations in the United States, where cannabis remain illegal at the federal level.

Canopy has said it has no plans to enter the U.S. because it would be a violation of Toronto Stock Exchange listing standards.

Until this week, financings had been exclusively led by investment banks such as Canaccord Genuity and Eight Capital in the absence of Canada’s biggest banks. Credit unionshave led the way in offering banking services.

“It should incentivize other bank-owned dealers to move in during 2018 in a variety of ways. The bigger deal will be if the commercial banking arms of these institutions take it on properly,” he said.

Canopy is based in Smiths Falls, Ontario and its shares are traded on the Toronto Stock Exchange as WEED.