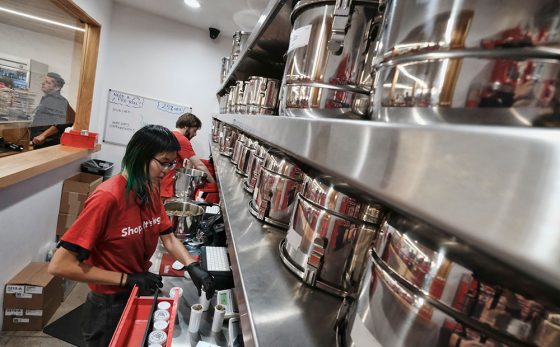 LOS ANGELES — Like many cannabis shops in California, the Urbn Leaf in San Diego bulked up its inventory before legal sales began on Jan. 1, stockpiling enough marijuana to last for months because no one knew what the era of legal marijuana would bring.

The shop, along with others involved in the state’s fledgling cannabis economy, are now concerned that too few operators have been licensed to support a marijuana pipeline of state-approved growers, distributors and retailers.

In some cases, they say, bottlenecks have already slowed the supply chain from fields to storefronts.

“They are going to have to come online with more producers in the next 12 months to keep up with the demand,” said Will Senn, the founder of Urbn Leaf who operates three dispensaries and plans to open three more, including one in Los Angeles.

“The black market will balloon if we can’t get legal, licensed producers to step into the industry. That’s the biggest risk,” he said.

Nearly a month after legal sales began for adults in the nation’s most populous state, the longstanding medicinal and illegal marijuana markets are still transitioning to a multibillion-dollar regulated system, estimated to eventually reach $7 billion in value.

Questions about the supply chain represent just one example of early obstacles that range from complaints about hefty taxes to the refusal of most banks to do business with cannabis companies because the drug remains illegal on the federal level.

In one way, the arrival of legal sales has been a story about borrowed time.

Most of the marijuana now being legally sold in California comes from plants that were harvested last year, and those reserves can be sold until July 1, provided they have required labeling.

Lori Ajax, the state’s top pot regulator, said officials are aware that those initial supplies will eventually dry up but it’s too early to tell how the legal supply chain will work.

“We legalized cannabis — you want to have that product available,” she said. “We don’t want people going to the black market because they can’t get product from the legal market.”

In Santa Cruz County, TreeHouse dispensary CEO Bryce Berryessa is already having trouble keeping some popular brands on his shelves.

Operators are required to have state and local licenses to conduct business, but must get the local one first.

Without money to relocate to a pot-friendly community, “they are going to be unable to find a pathway to legally sell their products,” said Berryessa, who sits on the board of the California Cannabis Industry Association.

“I think this affects a large portion of California cannabis businesses throughout the state,” he said.

For now, legal sales for adults appear to be robust in San Diego, Los Angeles and San Francisco.

But the patchwork of local regulations — some cities and counties have banned all commercial activity — has erected barriers to getting marijuana from place to place.

Some longtime growers are marooned in counties that don’t allow cannabis or have imposed regulations so tight it’s tantamount to prohibition. In some cases, investors are backing away.

Without a local license, “it doesn’t matter how incredible their products are,” Berryessa said.

Indeed, the once-shadowy business of cannabis distribution is no longer about sending a text message to a friend. Regulators have come with complex procedures to keep a tight leash on the market, though some say it’s bringing more confusion than efficiency.

In general, a retailer who needs to stock shelves must contact a distributor, who in turn picks up cannabis from a grower.

The marijuana is then sent to a warehouse, where a testing company picks up a sample and analyzes it for pesticides and other contaminants, as well as potency. It cannot be sent to the retailer for sale until it clears that check. The distributor can also do packaging, with taxes assessed along the way.

Cannabis that fails testing goes back to the grower. If the problem can’t be fixed, it must be destroyed, further tightening supplies.

So far, one of the biggest challenges is having enough growers and distributors to do the job.

In total, the state has issued about 1,900 licenses in all categories so far. By comparison, there are an estimated 15,000 illegal marijuana farms in Humboldt County alone.

Only about 20 licenses have been issued for testing statewide.

Berryessa said what once could be done with a phone call could now takes days or weeks as marijuana moves through the supply chain, each step with added costs that will inevitably drive up prices.

And when a product isn’t on his shelves, business suffers.

“The time from production … to market is going to increase significantly,” he said.