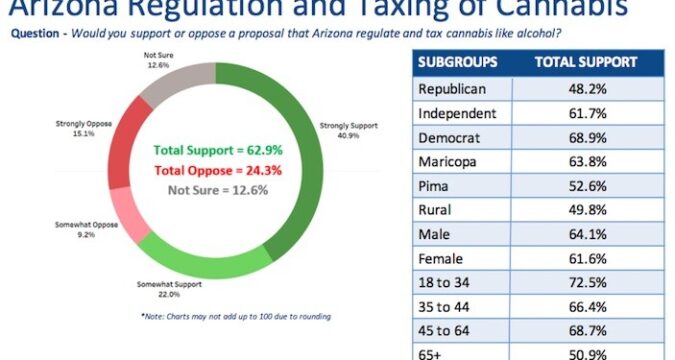 A new poll asked whether or not Arizona’s voters “would support or oppose a proposal that Arizona regulate and tax cannabis like alcohol?” An overwhelming majority have responded positively to the idea, as volunteers work to gather the required signatures to place an initiative before the voters on the Nov. 6 ballot.

The poll, broken down by political affiliation, age, gender, and location, indicates that 62.9 percent of surveyed voters either strongly or somewhat support the regulation and taxation of marijuana, according to OH Predictive Insights and the Consumer Choice Center.

While 24.3 percent of those surveyed noted they opposed the outright legalization of recreational marijuana in the Grand Canyon state, support for regulating and taxing the plant was typically highest in specific subgroups; individuals between 18 and 34 years old (72.5 percent), Democrats (68.9 percent), and Independents (61.7 percent).

Still a partisan issue for many of Arizona’s elected officials, 48.2 percent of those respondents who self-identified as Republicans voiced support for reforming the state’s marijuana law. 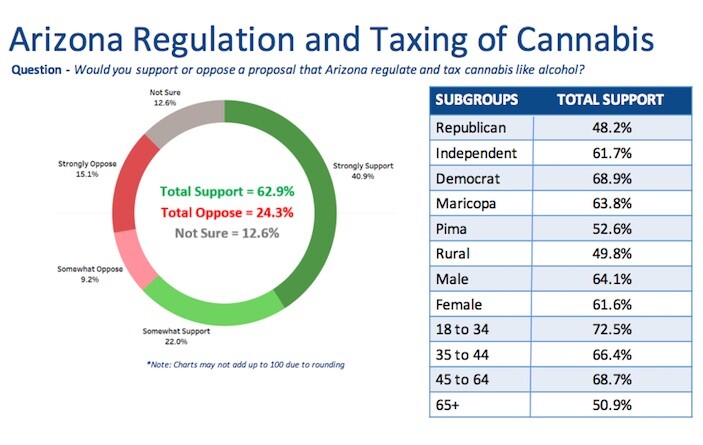 For the poll, the Phoenix-based company queried 189 Republicans, 222 Independents, and 190 Democrats between Feb. 7 and 8. OH Predictive Insights surveyed the 601 registered voters in Arizona via telephone – with 40 percent coming from cell phones.

Given a margin of error of +/- 4 percent, this poll is a potential harbinger of things to come for Arizona residents. In 2016, Arizona’s initiative to legalize recreational marijuana, Prop 205, was defeated by more than 2 percent.