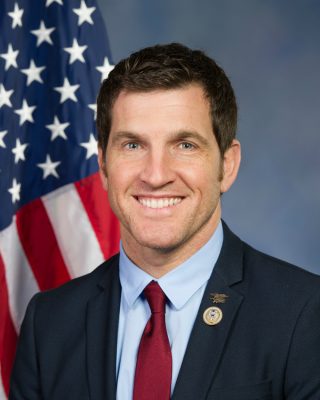 A constituent threatened to kill U.S. Rep. Scott Taylor, R-Va., over a disagreement on marijuana policy, according to law enforcement authorities.

Wallace Godwin, 69, of Virginia Beach, was arrested Friday and charged in Norfolk federal court; he faces up to 10 years in prison.

“The tone of our discourse has come to unacceptable and dangerous levels,” Taylor said in a statement after the arrest was announced. “I call on everyone, and I mean everyone, to please calm down. We are all Americans. There is so much that unites us.”

According to court documents, Godwin met with members of the congressman’s staff Thursday afternoon in Virginia Beach and became frustrated during a discussion of marijuana policy.

“Scott is having an event this Saturday. I am going to get my shotgun and do something about this,” he said, according to an affidavit from Capitol Police officer Gerren Stith. “I will just handle this myself.”

He then pointed at two staff members in the room and said, “You two are next,” according to Stith.

Taylor was not present. He had multiple public appearances scheduled for Saturday, staff told Stith.

The threats were “believable,” Taylor said, and his staff immediately called the Virginia Beach Police Department and the Capitol Police.

Police determined that Godwin has a concealed weapon permit.

The man had “appeared at a couple of my political events in recent weeks acting inappropriately,” Taylor said.

According to the affidavit, Godwin began harassing Taylor last year. He went to Taylor’s home and blocked the congressman’s vehicle with his own, staff told Stith. When Taylor came out of the house, Godwin got out of his car and began talking about marijuana policy. Taylor asked him to leave and he did, according to Stith.

Godwin was also reported to the Capitol Police last year for yelling at staff in Taylor’s Virginia Beach office, according to law enforcement.

Godwin does not yet have an attorney; he made his first appearance Friday afternoon.

Godwin filed a lawsuit in 2017 against the federal government, saying marijuana laws were not being enforced.

“I am a natural born conservative,” he wrote. “Read the Federal law on marijuana. . . . Marijuana has been altering the minds of the American people since the early ’60s.”

The lawsuit was dismissed in October, with a federal judge ruling that Godwin lacked standing to challenge enforcement of the Controlled Substances Act.
pot-threat-1stld-writethru