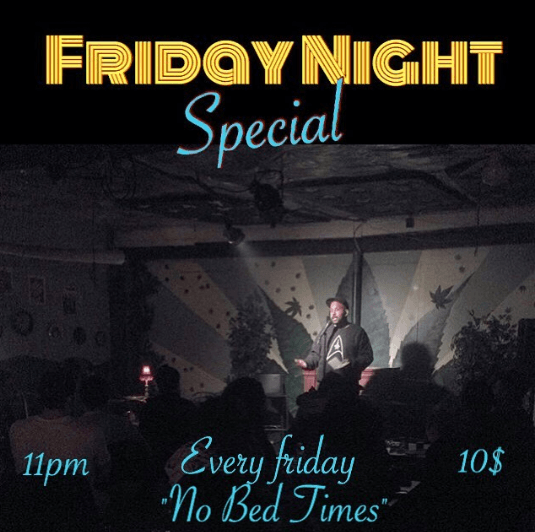 It wasn’t until a month ago when my friend sent me an invitation to his birthday party that I learned about the Underground Cafe 420. For you casuals out there, it is an exclusive comedy and social club and quite frankly, I’m surprised I had never been before or even heard of it. While I didn’t make it out to my friend’s birthday that evening, he raved about how great the experience was and how I needed to go for myself. In my head I thought, how bad could it be? I mean, cannabis and comedy are truly an age-old pairing, so I decided to check it out.

Since legalization in Canada, I have really wondered why it has taken so long for comedy clubs to start embracing the average cannabis smoker. For so long, I remember I would have to run to an alley with some pals to smoke a joint and then wander back in, red-eyed and dazed, ready for a show. Now some places specifically invite smokers in (to smoke), but not Underground Cafe 420. More on that in a bit.

On the night in question, I brought along two pals with me to check out Underground Cafe. Located in Toronto’s Riverside, you’ve likely walked past it numerous times and not even known it was there. Trust me, when I arrived outside, this was exactly the way I felt. When we walked inside and were greeted by PuffMama (the owner) and her staff, we felt right at home. To be honest, the venue didn’t feel like a comedy club but more like someone’s living room or basement. There was a special kind of vibe in the air that was super chill and friendly, where you just knew everyone was there to have a good time. The best part? No one was drunk and no one was acting a fool. It was like the perfect slice of heaven.

The Underground Cafe has been producing shows since 2006 and inviting new and seasoned comics onto their stage. As cannabis consumption becomes more mainstream, people are looking for places like The Underground, to smoke a couple of joints and have a few laughs. Until recently, The Underground permitted smoking indoors but has since been told that can no longer be permitted, so guests must smoke curbside. It doesn’t take away from the vibe of the place. Plus, it is not the only place for cannabis comedy in Toronto.

As we have known for years, cannabis and comedy go hand-in-hand, so it makes perfect sense that Vapor Central hosts Stoner Sundays. The event, held by Just For Laughs comedian Mike Rita, brings in a number of seasoned comedians and gives them a stage to test their chops in front of an audience that won’t go for the cheap gag. In an interview with The Toronto Star, comedian Mike Rita explained: “They might not laugh at you the entire show, but after they’ll stop you outside and be like, ‘Dude, that was the best show.”

If you haven’t been to a show, I highly recommend it. While Vapor and Underground Cafe are just two of Toronto’s top spots, you can also mark your calendar for Toronto’s upcoming Cannabis Comedy Festival called DOPE. But if you’re not in Toronto, research what’s going on in your city. Cannabis and comedy go hand in hand, and to be honest: a comedy show is way better when you’re surrounded by your fellow smokers.