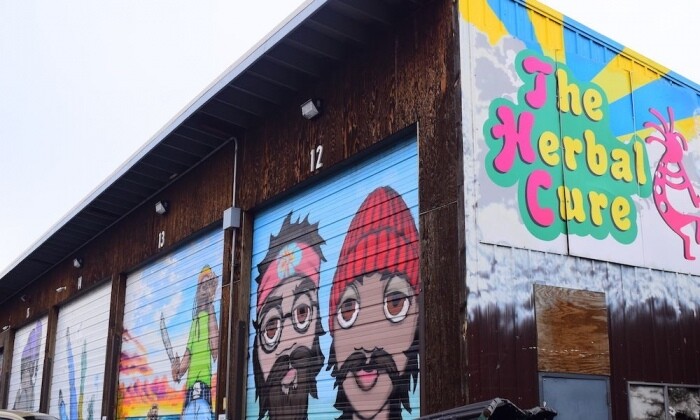 Having trouble deciding which dispensary in Denver to visit? Here are a few of our favorites.

Welcome to Denver—ground zero of the green rush. At the end of the first year of recreational cannabis sales in 2014, there were 147 licensed retail stores in Colorado. Cut to five years later and it’s hard to imagine that cannabis was once illegal here, with 529 licensed retail stores in the state (as of May 2018). The majority of our picks are the OGs of Denver’s medical marijuana dispensary scene, first opening their doors in 2009, and since expanding their cannabis offerings for patients and recreational consumers alike.

For visiting cannabis enthusiasts, a dispensary is always on the itinerary, but with an overwhelming number of options, it’s hard to know where to even start. And for all canna-curious newbies, finding a shop that employs a staff with expert-level knowledge is essential in navigating ever-growing menus of flower, edibles, topicals, concentrates, and accessories. Here are the 15 best recreational marijuana dispensaries in Denver that’ll make your time in the Mile High City even higher.

Located in the heart of downtown Denver in a former gas station adorned with graffiti art, it’s the perfect pitstop before catching a Rockies game at Coors Field or a night out on the town. Owned under the Rocky Mountain High umbrella with seven locations across the state, its flower is award-winning. In fact, they just took home a 2nd place trophy for “Best Colorado Sativa Flower” at the High Times U.S. Cannabis Cup in Denver.

Multiple Locations
With a pair of industry bigwigs behind it all, the power of its flower speaks for itself.

Cannabiz pioneers, Tim Cullen and Ralph Morgan, founded Colorado Harvest Company (formerly Evergreen Apothecary) in 2009, now holding 36 state and local licenses in Colorado. They also happen to be the brains behind the best-selling vaporizer brand, O.penVAPE and the nation’s largest organic hash oil production company, OrganaLabs. Inside any one of their three Denver area retail stores, you’ll find a minimum of 20 freshly harvested strains on shelf that are organically cultivated in three innovative facilities totaling 55,000 square-feet. Customers praise the always-friendly staff and the expert-level of knowledge they drop from behind the corrugated metal bud bar. The Yale location is worth the trip from downtown, where you can step inside their own branded Volkswagen “magic bus” for a selfie.

Valverde
A sleek, high-style space is matched with high-quality flower.

Diego Pellicer leans on luxury for the consumer experience with affordable pricing for premium products. Its concierge-style level of service from its staff of “marijuana sommeliers” stands out and earned employee Gladys Solis the honor of “2017 Budtender of the Year” at the 7th Annual Cannabis Business Awards. The boutique, which has an equally as beautiful second location in Seattle, also took home trophies for Executive of the Year, Manager of the Year, and Retail Store of the Year.

Its 3,600-square-foot flagship store opened on Colfax Avenue as one of Denver’s first higher-designed, state-of-the-art dispensaries. Since then, two more locations (Aurora and South Broadway) have opened and the company’s signature color-coded “effect categories” of recommended uses (Amplify, Relax, Relieve or Sleep) guide customers toward an experiential-focused product selection process steered by a knowledgeable staff. More than 60 strains of flower, extracts and concentrates are cultivated under the Good Chemistry Nurseries umbrella, whose products are also available in select Nevada retailers. Founded in the spirit of “making life better” for those in need, Good Chemistry is also committed to giving back, officially supporting ONE Colorado, Capitol Hill United Neighborhoods, Denver Police Brotherhood, Comitis Crisis Center of Aurora, the Harm Reduction Action Center, the Aurora Police Association and more.

Multiple Locations
Homegrown in the High Rockies since 2009 with 12 Colorado-proud locations.

With a state-of-the-art grow facility at its Glenwood Springs-based headquarters (and a second in Denver), Green Dragon produces premium flower for its 12 Colorado locations the state. A selection of Green Dragon exclusive strains, which come in precise, plastic sealed to-go packs (making transactions faster than most dispensaries) line the wall behind the counter cases where you can also find a deep collection of Colorado’s leading edible, concentrate, and topical brands. Locals and tourists alike keep coming back for competitive prices and freebies from its loyalty VIP program. Beyond the Denver metro area locations, you can also follow the Green Dragon to ski country and stock up at outposts in Aspen, Breckenridge and Telluride before shredding the gnar.

Multiple Locations
This ever-expanding chain sets the customer service standard with concierge-level attention to shop through an extensive product selection.

Although it’s family owned-and-operated by Colorado natives, The Green Solution (TSG) has grown into one of Colorado’s largest dispensary chains with 16 locations in the state. Their award-winning (the current tally is at 70 and counting), premium flower is available in six tiers: Private Stock (competition-grade), Feature (particularly phenomenal harvests), Top Shelf (the perfect balance of quality and price), Store Special (high quality flower for limited time discounted price), Value (smaller buds) and Ground (residuals from trimming that are ready to roll). At its 20,000 square-foot facility in Denver, TSG also produces a signature line of concentrates, Nectar Bee. Traveling west on I-70 when in town? Be sure to exit at Silver Plume for a stop in TSG’s official outlet store where everything, yes everything, is deeply discounted.

With a vision to create a neighborhood resource focused on responsible cannabis use and its medicinal benefits, the GroundSwell team has deep roots in the community—both living in the area and producing large-scale events for the Bluebird District for the past ten years. Dedicated to providing clean cannabis products from its own offsite organic cultivation facility, its boutique space offers a tranquil respite from “the longest, wickedest street in America.”

Washington Park
When T.H.C. are the initials, it has to be on point.

This log cabin-esque depot has a “Cannaboose” on the property—in the form of a 1927 train car the owners inherited when they purchased it in 2010. The cool factor continues to the back of the building, which rotates with commissioned, custom graffiti murals by local artists. Inside, you’ll find exotic strains—only $20 an eighth all day, every day. “The Cure Crew” is a tight-knit team, and they shine when it comes to their customers.

Led by a team of longtime industry experts, Kind Love has a large selection of the highest profile product portfolios on the market across all categories. For a try at growing your own, grab a seedling from the Clone Bar—a rare offering in Denver’s dispensaries. Customers love the “Kind Club Loyalty Program” where members earn points for rewards good for everything in the store. Bonus: they’re open later than most other dispensaries, until 11:45 p.m. (seven days a week) to accommodate busy schedules or wild weekends.

Santa Fe
The first and only adult use indoor grow in Colorado to achieve Clean Green Certification—an initiative modeled after the USDA National Organic Program.

With a long list of awards and accolades, L’Eagle Services has set the standard in organic cultivation practices since its opening in 2010 in an industrial park near downtown. Its stellar budtender staff runs the recreational retail space on-site making its flower and in-house cured concentrates among the freshest you’ll find in town (or anywhere). Co-owner Amy Andrle is a founding member of the Cannabis Certification Council, a Denver-based non-profit that independently certifies cannabis products as “Organically Grown and Fairly Produced.” You can find hard-to-find-clones here, too.

Multiple Locations
Run by a team of scientists, farmers and experts, this chain is committed to quality and powered by an unwavering passion for the plant.

Education, responsibility, and enlightenment are the ethos of LivWell, a family owned chain of clean, bright boutiques. Founded in 2009 “with one little clone and one very big dream,” LivWell has grown to seven stores in the Denver metro area with a total of 14 statewide (including one more in Springfield, OR). In addition to stocking their own lines of award-winning flower and specialty label concentrates, edibles and topicals, LivWell is also choice among celebrity-backed brands like Leafs by Snoop and Willie’s Reserve. Their dedication to elevating the industry goes beyond the dispensary, too, through philanthropic arm, LivWell Cares, which works with a host of organizations where it operates to raise funds and cultivate community.

What began as a medical dispensary on the 16th Street Mall in 2013, Native Roots’ signature black and white pop-art graphics mark the spot at each and every one of its 20 shops across the state (and counting). Now considered one of the largest chains of marijuana shops in the US, its crew of homegrown owners have blazed a trail for the entire industry. Modern, bright displays showcase signature strains, concentrates, and the pioneers in the product space from Mary’s Medicinals and Apothecanna, to Sweet Grass Kitchen, to marQaha. And picking up a pack of Native Roots Shorties (five mini joints) for party favors is a must.

Family-owned-and-operated, Natural Remedies opened in 2009 as one of Denver’s first 20 medicinal cannabis dispensaries, its loyal customers continue to hit “Natty Rems” for its award-winning flower and in-house concentrates line of CRx, cultivated by hand in two offsite warehouses totaling over 30,000 square feet. In the downtown shop, you’ll find a smart staff behind the curated counters filled with edibles, topicals, accessories, and CBD products along with more than 20 strain varieties on rotation. Pro tip for picks: Gorilla Glue (hybrid), Bob Saget (sativa), and Natty Rems OG (indica).

University (DU)
This mom-and-pop shop is beloved for its hand-cultivated landrace strains.

A collection of some of the most exclusive cannabis in the country, Sacred Seed more than merits its name offering true landrace strains, all of which are procured from seed—not unreliable clone stock. With a focus on elevating wellness, the self-proclaimed “mom and pop shop” cultivates its grow operation by hand and infuses its own line of waxes, shatter, crumble, and oils under the label of Sacred Seed Pharms. The college coeds in the neighborhood head here for its spirited staff, competitively priced menu, and monthly discount specials.

LoHi
Pot, politics, and food is what they do at this forward-thinking cannabis company.

Opening the first black-owned dispensary in Denver, entrepreneurs Wanda James and Scott Durrah are also military Veterans, so extensive education and advocacy is at the forefront of Simply Pure. As one of High Times 100 Most Influential People in Cannabis last year, James, in partnership with her husband Durrah, are paving the way in a movement that extends way beyond their elevated retail experience. Among their multiple business endeavors in the industry over the years, they got an early industry start in 2009 as hosts of “Creative Cooking with Cannabis“ to sold-out audiences in the Denver area (long before canna-chefs were a thing) and are rolling out a new schedule come summer.