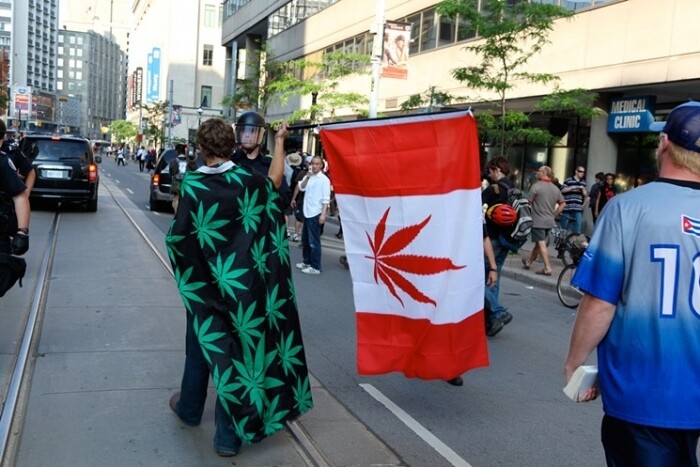 Canada became the second country in history (behind Uruguay) to legalize cannabis on a federal level after that country’s Senate passed a legalization measure on Tuesday, June 19. Prime Minister Justin Trudeau later announcing that regulated sales would be up and running by October 17.

We’re no strangers to legal weed here in Colorado, where sales have brought in nearly $5 billion since 2014. But Canada’s cannabis market won’t look much like what we’re used to, nor like what the other six states with legal sales are seeing. To ensure there are no surprises during your next trip north of the border, here are seven ways that Canada’s legal cannabis system will differ from ours.

It’s good with the man, man
Unlike the United States, where states that legalize medical and recreational cannabis are in direct conflict with federal law, Canada’s federal government has been working to end prohibition since Trudeau was elected in 2015. Medical marijuana has been federally legal in Canada since 2008; an act to legalize it recreationally was first introduced in April 2017. A blessing from the feds goes a long way for an industry and its consumers — and that’s a blessing that American cannabis companies crave, as U.S. Attorney General Jeff Sessions continues to fight against their growth.

You can order it online
Perhaps the biggest difference is that customers will be able to order cannabis online in Canada, where medical marijuana can already be ordered online. Canadians will have to show proof of age in order to receive their products; the law requires that the person who ordered it be present for delivery. Although Colorado doesn’t allow cannabis delivery (a bill that would’ve okayed it died in the state Senate earlier this year), California allows medical marijuana patients to order dispensary products using GPS technology, and New York, Florida, Massachusetts and Oregon also allow some form of cannabis delivery.

You don’t have to be 21
Another major difference between recreational cannabis sales in Canada and America will be the age at which you can buy  legal pot. Some U.S. states that have approved medical marijuana allow children who are patients as well as those over seventeen to use it for treatment, but any state that has legalized it recreationally has implemented a 21-year-old age limit. The Canadian federal government’s minimum age for retail pot use is eighteen, although it allows provinces to alter the age limit, and many are expected to add at least one year to it.
No edibles
The confusion around the packaging, dosage, ingestion and effects of edibles and other infused products caused quite the shitstorm in Colorado after retail sales began. The Canadians aren’t even ready to go there yet, saying they need another year to figure out edibles regulation. Sadly, that means no pot-infused poutine until at least 2019, with dispensaries only carrying flower, concentrates and seeds the first year.

Cannabis companies have access to banks
With the fed’s blessing comes many opportunities, such as as access to banking and financial services. Virtually every licensed cannabis enterprise in the States is a cash-only business, because banks won’t serve them out of fear of federal prosecution and subsequent asset forfeiture. American cannabis companies are also barred from applying for loans without banking services, and the IRS doesn’t allow them to file for business tax deductions, either. Canadian companies won’t have to deal with those barriers.

And the stock market
Another obstacle for America’s pot industry is obtaining public funding. A small number of pot businesses have tried to take the plunge — ancillary and consulting firms with ownership stakes in pot cultivations, dispensaries and infused-product companies have attempted to go public with mixed success — but the plant’s Schedule I status has had a chilling effect on pot IPOs.

Colorado cannabis companies Dixie Elixirs, Evolab, Incredibles, LivWell Enlightened Health, Native Roots and O.penVape have all inked deals with Canadian partners in anticipation of legalization, and they’re not the only Americans looking to the north.

Some dispensaries will be owned by the government
Each Canadian province will determine how to regulate certain aspects of legalization, such as home-growing and distribution — much like the way counties and municipalities in Colorado are allowed to create some of their own cannabis rules. But with differences: For example, Canadian provinces can operate their own state-run dispensaries, which are unheard of in Colorado.

Ontario plans on having 150 state-owned dispensaries, while British Columbia plans on having a mix of public- and privately-owned pot shops; several states will only have private stores. State-owned dispensaries could pop up in remote communities where private stores might not be economically viable; selling pot at existing liquor stores is also an option for those secluded areas.

(333921)
Meet Echo Dot - Our most popular smart speaker wit... read more
(as of May 24, 2020 - More infoProduct prices and availability are accurate as of the date/time indicated and are subject to change. Any price and availability information displayed on [relevant Amazon Site(s), as applicable] at the time of purchase will apply to the purchase of this product.)

(1)
🌈【 OUR BANDANA IS LIGHTWEIGHT, SOFT, THIN, AND BRE... read more
(as of May 24, 2020 - More infoProduct prices and availability are accurate as of the date/time indicated and are subject to change. Any price and availability information displayed on [relevant Amazon Site(s), as applicable] at the time of purchase will apply to the purchase of this product.)

(192900)
The most powerful 4K streaming media stick.Watch f... read more
(as of May 24, 2020 - More infoProduct prices and availability are accurate as of the date/time indicated and are subject to change. Any price and availability information displayed on [relevant Amazon Site(s), as applicable] at the time of purchase will apply to the purchase of this product.)