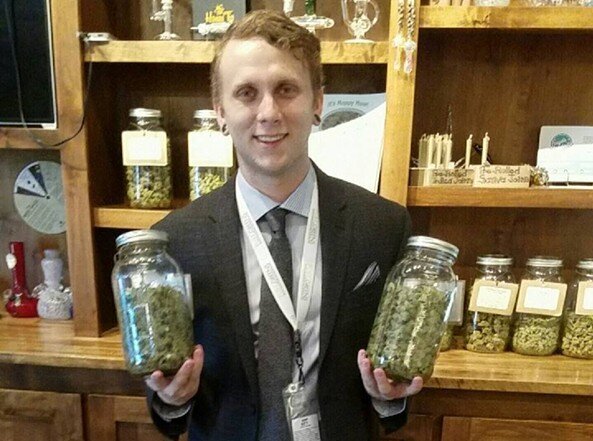 With over 1,100 cannabis businesses issued licenses around the city, Denver has no shortage of dispensaries and growing operations. While only one of those businesses currently allows social cannabis consumption, that’s expected to change later this year, when the second social-use business, Denver Vape and Play, opens on South Broadway.

Initiative 300, the voter-approved Denver ordinance allowing businesses to apply for social-use areas, has been criticized for its location restrictions and ban on smoking — but Taylor Rosean, founder of Vape and Play, considers funding the biggest obstacle to his enterprise. Westword recently chatted with Rosean to learn more about opening a licensed cannabis lounge.

How’d you get involved in legal cannabis before Vape and Play?

Taylor Rosean: It was early in the year 2014, and I was experiencing difficulty maintaining steady pay as a personal trainer. Having shopped for cannabis medically since 2010, I was gradually seduced by the ever-growing legal industry. I started to see it as a place where I could pursue genuine growth and stability. My mother was actually the person who urged me to acquire my Marijuana Enforcement Division industry badge. She recognized the potential of this industry immediately, and we agreed that if I wanted to make something out of it, I needed to be there at the beginning. So in July of that year, I quit my job and dove in.

Why did you choose to jump into social consumption instead of opening a dispensary, grow or other cannabis business?

Over the years, I progressively grew alongside the companies I worked for, and in that time I learned a lot about the industry from a business perspective. Early on, I observed the dynamic nature of the challenges facing the more “traditional” cannabis businesses, and all too often, I saw brands go in and out of vogue with customers. As I became more involved in the business side, the challenges and expenses associated with overseeing a commercial cannabis operation became overwhelming. Despite the excitement of the market, in my perspective, the shrinking margins simply weren’t sufficient justification to enter the already saturated marketplace.

Fast-forward to December 2016. A whiteout grounded my flight to California, where a solo spiritual retreat I had been planning for months was awaiting. Stuck at home, one vacation down the drain and feeling lost, I opened up a Westword article about a new voter initiative, I-300. Upon reaching out to my professional network for advice, I was directed to the first DCA (Designated Consumption Area) regulation task force meeting. Before I knew it, I was attending sessions that determined the legal consumption regulations, and I was speaking my opinion during the public comments

It quickly dawned on me that these licenses are relatively cheap, and there is a vast untapped market. The only extraneous requirements were getting involved with the local community and searching for the right property (something any new business should do). Not to understate the other obstacles of starting a business on top of that, but there were solutions to all the problems, as I saw it. It was clear to me if I was going to start any sort of cannabis business, this was an affordable option and an opportunity I could not miss.

What were some of the biggest challenges while bringing the idea of Vape and Play to fruition?

To put it simply, creating something from nothing was the hardest part. The first year of Vape and Play was spent attending legislative meetings, meeting with Denver-area registered neighborhood organizations, working with the Department of Excise and Licenses, meeting with municipal government members, working with cannabis law experts, and doing everything we could to create the most compliant designated cannabis consumption venue possible. All the while, we assembled our team and began to develop a consumption device ready for public use.

In 2017, after six months of getting down to brass tacks and projecting the operational details out, we began fundraising. Initially, we tried crowdsourcing in September, to no avail, so we attended MJ BizCon in November to pitch our business — to no avail — and in December, we tried pitching to cannabis venture capital groups…to no avail. At the beginning of 2018, we decided to bootstrap our investment as a company with every buck we could spare from every person we could think of. Currently, this company is owned by family and family friends. We are pretty proud of that.

Taylor Rosean and his mother, Megan Lumpkins, submit their application for a Cannabis Consumption Establishment license on June 7.

How did your family help you launch the business?

My parents were the first people encouraging me to get involved in this market. Knowing my family, it was only a matter of time until they got involved. I did Boy Scouts for eleven years, where my Mom volunteered as an adult leader; we even both co-led my troop in leadership for several years (that was also the first time I smoked weed…sorry, Mom).

My stepdad, along with a full-time career of his own, spent his time starting companies to sell DIY wooden toys and robotic gadgets; it has been an on-off family project over the years since that started.

It all began in summer of 2017, when I reached out to my mother, Megan Lumpkins, to see if she was interested in helping out with community outreach. She has a long history of volunteering and community involvement, so I knew she was perfect for the job. One thing led to another, and we ended up equal partners in this business venture, plowing through the obstacles and assembling a dream team.

Separately, after a long process of R&D with a couple of different engineers to find the right consumption device, I figured I should be reaching out to someone who really knew their stuff. I couldn’t think of anyone better suited than Kerwin Lumpkins, or Pop, as I call him.

And since this business was more or less conceived in his living room and over family dinners, he already knew the requirements for the project and figured he could easily do it. With him being an electrical engineer and software engineer for over a decade, I knew he could, too.

Even my little brother finds time to help with photography and copywriting when he can. It’s really become a collective family effort.

There’s been vocal opposition to some of I-300’s stipulations, but you’ve also been vocal about your positive experiences with the city while trying to open. What are your thoughts on I-300’s location restrictions, and the smoking ban on these businesses?

Since this is such a contentious issue in the cannabis business community, let me start by saying this: Yes, I do believe that there are some current regulations, such as location restrictions and the Clean Indoor Air Act, that should be revisited and revised to make it easier for businesses. Personally, I don’t think this is a panacea solution, but any progress for the cause is good.

But I would also like to remind my peers within the cannabis business community that we have had a long history of tough regulations and challenges. As a whole, this industry has such a colorful history of surmounting those obstacles with tenacity and creativity while maintaining a profitable business. It’s easy to forget sometimes that changing the rules of society so drastically comes with compromises. Yes, it’s going to be especially tough for the first few public consumption venues, but it’s on us to prove that this is a responsible and positive solution for our city before we can demand easements.

I see the most recent I-300 task force as a sign that the tides are changing, and that this city wants these businesses open. Once the community and government sees more DCAs in action, the allowances people want will come. Vape and Play is hopeful that one day the city will consider allowing DCAs to receive cannabis from the legal system and sell it to patrons. Or, who knows, maybe even allow us to serve that cannabis with alcohol, like adults already do all over the world.