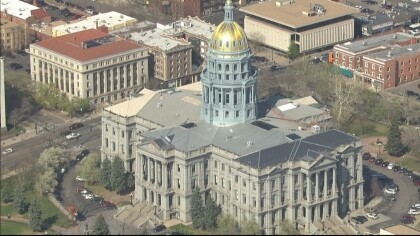 A bill has passed a Colorado House committee that would legalize the use of medical marijuana for those with autism. Families that are already able to use it for that purpose say they have seen amazing results.

The Walker family in Centennial is one example. With a quick spray,10-year-old Vincent takes his medical marijuana. The family obtains it from a foundation in Colorado Springs.

A video posted by the group Mothers Advocating Medical Marijuana for Autism shows a girl named Kara hitting her head repeatedly against a car seat. Once she is given the marijuana she appears much calmer.

Kreed wears a helmet for protection. And is much more relaxed after medication.

So too with Vincent, who legally qualifies for medical marijuana now in Colorado because of the seizures he suffers from epilepsy.

He was at the state Capitol with others on behalf of a bill that would make marijuana legal for all who have autism.

Many now use it illegally. Vincent’s mother Michelle Walker told CBS4 investigator Rick Sallinger, “They’re in fear to even speak out because they are worried their children will be taken away from them.”

The Walkers moved to Colorado from Texas to take advantage of medical marijuana. Scott Walker is a big advocate of the push to legalize medical pot for autism.

“I would like to see other parents have access to bring this life saving medicine to their children,” he said.

Vincent’s cannabis includes a small amount of the psychoactive compound THC. They say his seizures are gone.

Scott asked his son a question, “Vincent you want to go to school?”

The boy responded, “No, no more school on Saturday.”

Scott said Vincent was saying phrases he never said in Texas. Now they want others with autistic children to be able to give it a try.

The executive director of the Colorado Department of Public Health, Dr. Larry Wolk, opposes the bill.

He issued a statement to CBS4, “There has been insufficient research on the use of medical marijuana as a treatment for autism, and as such there is no scientific evidence that it is a safe or effective treatment. Given what we know about the harmful effects of marijuana use on brain development, sanctioning the use of medical marijuana for autism and autism spectrum disorders could be particularly harmful to children. Finally, the constitution explicitly directs rule-making authority to the department and the Board of Health to determine what medical conditions are appropriate for medical marijuana treatment. Aren’t these decisions best made by physicians, health experts and scientists, rather than legislators who in this case may be doing more harm than good?

“As physicians, we vow to do no harm. We, therefore, could never give marijuana to children simply because they fall somewhere on the autism spectrum. It’s bad medicine. I am extremely disappointed by yesterday’s legislative committee vote.”

The bill now moves on to the house floor for a vote. If it passes the next step will be the state Senate.