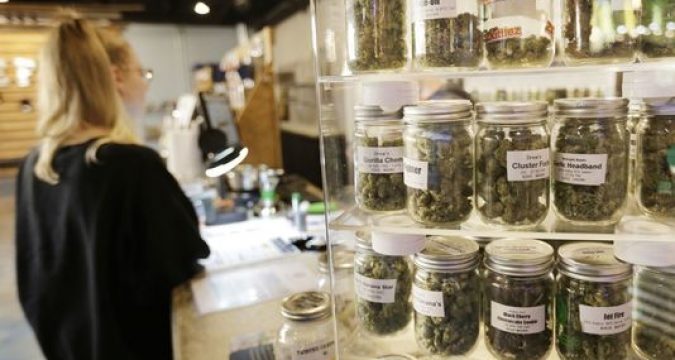 As Illinois prepares to embark on a potentially culture-changing adventure with legal cannabis, the first state to legalize pot offers a snapshot of the way the world may appear a few years hence.

Colorado legalized medical marijuana 19 years ago, and recreational cannabis in January of 2014. Today, Denver has more marijuana stores than Chicago has McDonald’s restaurants.

Indeed, a section of Broadway in the Mile High City, known as “The Green Mile,” is believed to have the densest concentration of cannabis dispensaries anywhere in the world.

“What we have found is the most dire predictions on either side, by the advocates or the opponents, really have not come true,” says Ashley Kilroy, Executive Director of Denver’s Office of Marijuana Policy. “With some opponents saying, oh, crime’s going skyrocket, or advocates saying, you’ll be able to bring in so much tax revenue you’ll be able to pave the streets with gold!”

Maybe not gold—but there has been an abundance of green.

Since legalization five years ago, marijuana sales in Colorado have topped $7 billion. State and local governments have raked in over a billion dollars in taxes and fees. Denver’s share in 2018 was just under $47 million, and is expects to top $63 million at the end of this year.

Sitting in her office at Denver’s City Hall where she also oversees that city’s business license office, Kilroy emphasized what she called “strict rules and robust enforcement.”

“We’ve worked really hard at this,” she said. “We knew when we first started that the world was watching and failure was not an option—that we had to get it right.”

While there is no doubting the windfall that Denver has reaped from legalized pot, the city plows a great deal of that money into enforcement, regulation, and youth cannabis education. Kilroy’s office hired nearly 70 new employees just to oversee marijuana enforcement.

But she emphasized that her city found itself in very uncharted waters when previously-illegal cannabis suddenly became very legal overnight, in January 2014.

“That was pretty crazy,” she said. “Having no one to turn to!”

Illinois, of course, has plenty of road maps, as it becomes the 11th state to legalize—even as the federal government agrees to look the other way. On day 1, only the state’s 55 medical marijuana sites will be licensed to sell recreational cannabis (along with potential satellite locations). The program will expand as further licenses are issued by mid-year.

Privately, Colorado officials say they wish they had mapped a “social equity” program like the one mandated in the new Illinois law. Under that initiative, a portion of marijuana monies are to be targeted at disadvantaged communities which were a prime focus when cannabis was ground zero of the war on drugs.

Financial assistance and fee waivers will be offered to minority applicants seeking licenses, and millions of dollars will be plowed into a “Cannabis Business Development Fund”, to provide low-interest loans, grants, and job training.

In Colorado, 570 stores now sell legal pot statewide. Walk into the typical Denver dispensary, and you’ll be asked to show your I.D. (it’s required by state law), and the first thing you’ll notice is the abundance of products.

There are THC-infused edibles of every kind, from cookies and candies to gummies and colas. Extracts known as “wax and shatter” are available, as are other products which look like tiny eye shadow jars, containing blobs of resin for “dabbing”.

“And you only need a little bit,” cautions Loretta Swazo, manager of Denver’s Medicine Man dispensary. “Just a tiny bit!”

During an evening visit Swazo showed NBC5 the cornucopia of products her store offers, including live plants and seeds for those who want to grow at home. It is legal in Colorado, although in Illinois you’ll need to have a medical marijuana card to be able to grow plants at home.

To be certain, you can find your grandparents’ marijuana here—but it’s packaged in little cannisters called “eighths”—-that’s the eighth of the ounce you are entitled to purchase under Colorado law.

Oh, and joints? You can buy them pre-rolled. And no registration cards are required. Just prove that you’re over 21, and you’re good to go.

No one in Illinois should plan on transporting their legal pot across state lines, even to another legal state. Even if the state grants a license, local communities can opt out of the program completely. Landlords will be able to bar possession and use in their buildings.

And no, you still will not be permitted to puff away in public in Illinois.

In coming reports, NBC5 and NBCChicago.com will explore every aspect of the new program here in Illinois. We will also examine Colorado’s experience and myriad challenges, including health issues, public safety, and concerns about cannabis consumption by kids.

Get ready, Chicago. It all begins New Year’s Day.