The current “green rush” has brought with it an intense focus on large-scale cannabis cultivation. Across the United States and around the globe, we routinely hear stories of companies building larger and larger cannabis farms.

In Arizona, Colorado, California, and Oregon, cannabis is being cultivated in greenhouses in excess of 250,000 sq. ft. that are capable of yielding more than 50,000 pounds of flower. While large-scale Canadian producers are building greenhouses in the millions of square feet and building similar-sized facilities in Europe, Australia, and elsewhere.

In the United States, cultivation licenses are often viewed as the most valuable in the highly competitive application processes that most states use to determine who is allowed to cultivate and dispense in their states. This value is partly derived from the fact many populous states initially only grant a limited number of cultivation licenses.

For context, Colorado has roughly 1,400 licensed cultivators for a population of just 5.5 million people. Competition for these limited permits is fierce, and those companies fortunate enough to win one see sky-high values attached to these licenses even before they become operational. In Florida, a coveted cultivation/dispensary license sold for $40 million before the company had seen a dime in revenue. Similarly, a pre-revenue New York license sold for $26 million.

Indeed, in states with limited cultivation licenses, those companies that hold them can see large returns on their investments in the near term. With artificially limited competition due to restricted license classes, cultivators in many states are able to control pricing and sell their product in large volume. Many of these cultivators grow their product in state-of-the-art indoor warehouses with clean-room environments that resemble pharmaceutical production facilities more than traditional commercial agriculture.

But is this trend sustainable? Or are these companies setting themselves up for long-term failure? As mentioned in my previous column “Are Canada’s Cannabis Companies Overextended?”, we’re already seeing a trend towards large-scale greenhouse and outdoor production, which is driving prices down in states that do not have strict limits on the number of licenses they grant.

For example, the average wholesale cost of cannabis in Colorado has dropped from nearly $3,500 per pound at the start of legalization in 2013 to roughly $1,012 a pound on April 1, according to the Colorado Department of Revenue.

In Oregon, where the state ramped up licensing after early product shortages, wholesale marijuana trim (after harvest, the cannabis is trimmed of its leaves; those leftover leaves are referred to as the “trim” and can be used to produce cannabis products) is now selling for as low as $50 per pound, which is reportedly driving some cultivators in the state out of business. 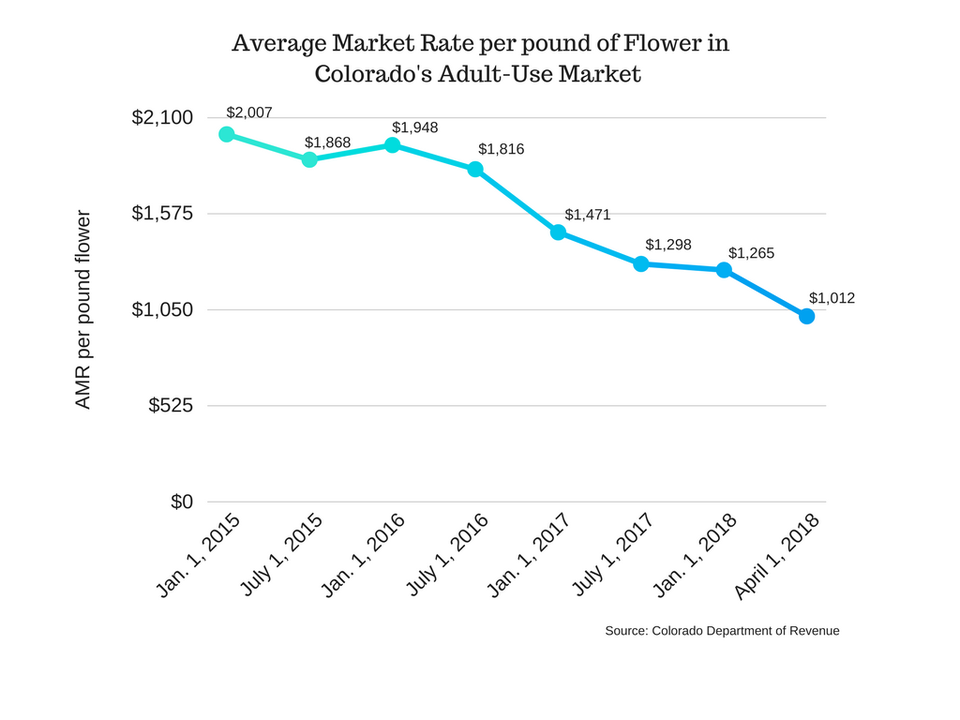 The average market rate per pound of flower in Colorado’s adult-use market has dropped roughly 37% in the last two years.

This trend will only continue when the federal government’s 80-year experiment with cannabis prohibition finally comes to an end. Today the cannabis industry is defined by individual state markets, where no product can cross state lines due to laws prohibiting interstate commerce of a federally illegal product.

But when prohibition eventually ends, then interstate commerce will open and businesses will be allowed to import their cannabis from any state in the country. When this happens, we can expect that large-scale outdoor and greenhouse production will dominate the market as cannabis commodifies.

Many of the same environmental conditions that make northern California ideal for the production of grapes for wine will also make it ideal for large-scale commercial cannabis production. The largest greenhouse complex in the country, estimated at approximately 300 acres (approximately 13 million sq. ft.) of greenhouse space, is located in Wilcox, Ariz., because the desert conditions make it ideal to control humidity in a greenhouse setting, something that adds a huge additional cost to greenhouse operators on the East Coast. These same conditions will apply to cannabis.

With the end of prohibition will also come potential access to international imports. The company that operated the aforementioned greenhouse in Arizona, which focused on winter month cucumber and tomato production, was recently put out of business in large part due to the proliferation of large-scale commercial greenhouses in Mexico, where labor and operating costs are substantially lower.

Mexico is already making moves to allow the production of medical cannabis. Meanwhile, Colombia has begun licensing cannabis cultivators for export, and has stated its intention to be the largest exporter of cannabis in the Western Hemisphere.

Once federal prohibition has come to an end in the United States, producers in these countries will look to import into the largest market in the world. The same market factors that have decimated the domestic production market for greenhouse-produced vegetables and cut flowers will likely eventually be at play in the cannabis market, as well.

Investing in large-scale cannabis cultivation today is like playing the end of alcohol prohibition by buying a hop farm. What investors should be more focused on is controlling brands and the distribution points for those brands.

Simply put, in the long term it will be simply untenable for large-scale indoor cannabis producers in the United States and Canada to survive. Even greenhouse producers in most regions of the country will struggle to compete with low-cost production on the west coast and Latin America.

For those companies currently spending millions of dollars building out state-of-the-art, high-tech, clean-room cultivation facilities across Pennsylvania, New York, Florida, Massachusetts, and elsewhere in the United States, be warned, you may find yourselves stuck with a beautiful state-of-the-art dinosaur.