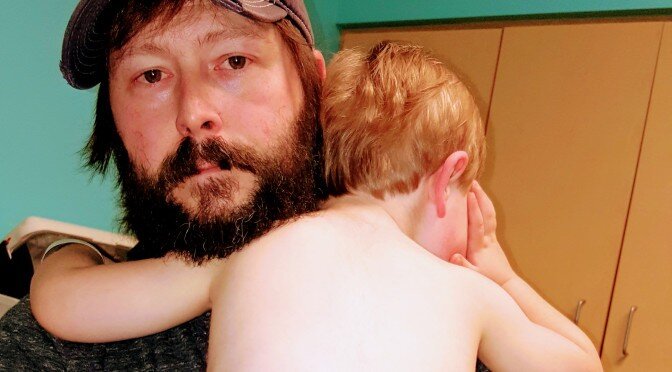 Christine and Matthew Cerrato are grateful to live in Colorado. The state’s medical marijuana program has allowed them to better treat their four-year-old son, Ethan, who has epilepsy and chronic kidney disease, among other conditions. Being able to use THC and CBD instead of opioids or other prescription drugs is essential for a better quality of life for the entire family, the parents say.

Yet life for the Cerratos is far from easy.

All five children in the family suffer from various conditions because of a chromosome deletion, but Ethan has it the worst. A tumor discovered at birth required surgery, which Matt says eradicated Ethan’s pelvic organs. His son’s bladder was sown outside of his skin, and he frequently suffers from nausea and indigestion.

“We have to avoid opioids as much as we can because when he goes on them, we have to take him off them. Then he can get severe diarrhea because his body is addicted,” Matt explains. “When he gets diarrhea, it can go straight into his bladder. That could kill him. That’s why the THC is so important.”

The CBD oil and low-THC nasal spray Ethan uses helps keep his epileptic seizures and nausea from the prescription medication at bay, but they can only be purchased by one person: his primary medical marijuana caregiver. And although he has two parents, current state law only allows one to be a caregiver.

A bill introduced in January by Representative Matt Gray would allow children under the age of eighteen to have more than one primary medical marijuana caregiver, allowing each parent or guardian to serve in such a role. “This is a common-sense idea. The idea that one parent can give their kid medicine and the other can’t is kind of ridiculous,” Gray says.

Most families that regularly visit doctors, hospitals and pharmacies have to deal with frequent road trips, little sleep and steep medical costs. Parents with children who need medical marijuana face a few more obstacles. First they must get approvals for such treatment from multiple physicians, including at least one who must have an existing patient relationship with the child. Then they need to figure out what marijuana medication works for their child, how it interacts with traditional treatment, and how to procure specific medical marijuana products, which aren’t for sale at most dispensaries.

It’s more than a simple trip to the dispensary from time to time, according to the Cerratos. Ethan and other young children with debilitating conditions make frequent unplanned trips to the hospital, where nurses aren’t provided with and cannot administer THC medication because of marijuana’s federal status, leaving that responsibility on the parents. In 2018 alone, Ethan was hospitalized eleven times.

“In every one of those, I stayed with him the entire time,” Christine remembers. “For the first year, I was the caregiver. But when we’d be at the hospital, I couldn’t just leave this small child, who is sick yet also very cognitively aware, with strangers. But on the other side, what else can I do, let him lapse in treatment? There is this really bizarre gap here.”

Matthew is now Ethan’s caregiver, making dispensary runs so Christine can stay at the hospital to comfort their son. But the Cerratos still face hurdles to fit in Matthew’s eighty-mile commutes from their home in Broomfield to Colorado Springs for Ethan’s medication: high-CBD Haleigh’s Hope oil and nasal spray, which aren’t sold in the Denver area.

“We’ve got other kids and have to take care of groceries and meals. Matt has the availability to go [to Colorado Springs], but if he’s sick or occupied, he still needs to go, even though I’m totally healthy and able-bodied to do this myself,” Christine says. “But we’re still lucky: We’re part of this gap that is married, in the same home, and Matt’s not traveling for work. We’re able to manage it, but I’ve had friends in the cannabis community go through ugly divorces… . Whatever the parental situation might be, it just doesn’t make sense.”

Christine took to social media to vent her frustrations one night, and Gray answered. He was familiar with the Cerrato family after helping get Ethan to Disney World in 2017. He says the bill is a no-brainer.

“This is one of those cases where the idea came straight from constituents. When I started talking with Matt, he told me that they were having problems in getting Ethan’s medicine, especially when they don’t know if they’re going to be in or out of the hospital,” Gray says.

So on January 4, the same day the state legislature convened, Gray introduced House Bill 1031 on behalf of the Cerrato family and other families he’s spoken with in similar situations.

The bill will have its first hearing on Wednesday, January 23, in the Colorado House of Representatives Public Health Care & Human Services Committee, and Gray is optimistic. Although he says he still has a lot of educating to do and meetings to have with his colleagues at the Capitol — he has yet to secure another sponsor of the bill — he says that “thus far no one has really resisted the idea.”

The Cerratos would still have to commute to Colorado Springs for Ethan’s medication, but they believe that having the flexibility of multiple purchasers would provide them with a little relief.

“We’re all busy. Both of us being able to make Ethan’s purchases just makes things run more smoothly,” Christine says. “Our son is at least able to remain stable in the car for two hours, but there are a lot of families that aren’t so lucky.”

You can follow the Cerratos and learn more about Ethan’s journey on Christine’s family blog.